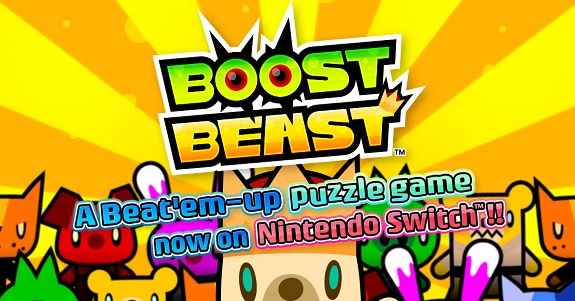 Today, Arc System Works revealed their next game for the Nintendo Switch: Boost Beast. Developed by Arzest, it’s a defense puzzle game where you need to defeat hordes of zombies by summoning animals, which is obviously done by clearing blocks (it is a puzzle game, after all!)

The sudden appearance of a virus-carrying meteorite infected the entire human race, and turned everyone into zombies.
The hero who rose up to face this crisis is Alec, the king of dogs. Will he be able to save the devastated world and reclaim peace..?

As for gameplay, here’s how it works: you have to match 3 animal blocks of the same colour in order to summon animals. Just like in any puzzle game worth its salt, there’s various gimmicks to deal with:

To defeat zombies, you can also use bombs:

Also, you chain combos like a pro! Combos allow you to summon more animals at once.

Boost Beast promises to be quite the meaty game, with no less than 204 in total… this one should keep you busy for many hours!

Next, here’s the various characters found in the game:

As for enemies, we have…

Wondering what the game is like? Here’s the reveal trailer:

Boost Beast will be released on July 20th worldwide, and will cost $9.99 / 9.99€. The Upcoming Releases page has been updated!