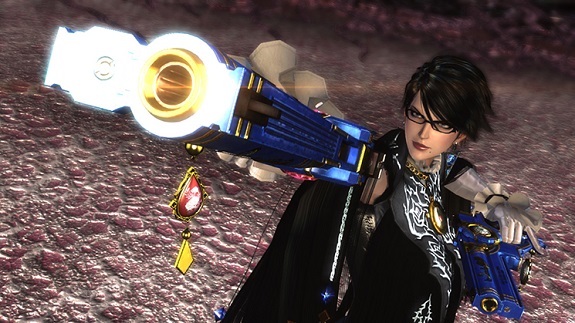 Today is the second Anniversary of Bayonetta 2, which was released in Japan on September 20th 2014. To celebrate, Yusuke Hashimoto (Director) posted not one, but two blog posts on the official PlatinumGames website.

First, he gives us a sneak peek of the Bayonetta amiibo, which will be released later down the line. No concrete release date has been announced so far, but Masahiro Sakurai previously confirmed that all Super Smash Bros. for Wii U and Nintendo 3DS characters would eventually get their own amiibo (including the DLC Characters).

Here’s the very first picture of the actual Bayonetta amiibo:

Yusuke Hashimoto explains that the team is working hard to get Bayonetta just right for this amiibo:

But I assure you that we’re going to capture everything you know and love about Bayonetta – every detail down to the exact sizes of her glasses and eyes – and bring you an amiibo that’ll meet your every expectation.

He also explains that when Bayonetta 2 was in development, there wasn’t any talk of creating a figure. In fact, it’s the first time ever a character from a game he directed is getting one. He’s pretty excited about the full unveiling of the Bayonetta amiibo, though he doesn’t tell us when that will be.

In that post, Yusuke Hashimoto also reveals that when planning for Bayonetta 2 began, they thought of not only having Balder as a playable character in the main story, but also to dedicate one half to him:

When we first started planning Bayonetta 2, we thought about having him as a playable character in the main story. The idea was to split the story into two parts: as Bayonetta, players would fight against angels; as Balder, they’d fight against demons. Each of these parts would show the story unfolding from its main character’s point of view, until the very end when they converge and start working together. That itself might not be new information, though… It’s an idea from five years ago, after all, so I might’ve spilled the beans about it somewhere along the line.

And to celebrate the 2nd Anniversary of Bayonetta 2, Yusuke Hashimoto also shared some “forbidden knowledge”. Basically, he reveals some pretty neat secret about the game:

You can find out more about these secrets by clicking here!