Attack on Titan: Humanity in Chains is a Nintendo 3DS game based on the popular Shingeki no Kyojin / Attack on Titan series. Thanks to an interview of Michael Manzanares (Project Lead at Atlus USA), we now have some additional details about the game, its characters, its gameplay, and more.

In Attack on Titan: Humanity in Chains, players will get to experience pivotal moments of the first anime season, complete with cutscenes and voice acting. You can play as various characters, such as Eren, Mikasa, Armin, Levi and Sasha, who all behave differently. For example, Eren is the only one who can transform into a titan, Mikasa and Levi have a higher critical hit rate, while Armin and Sasha are better in a support role. 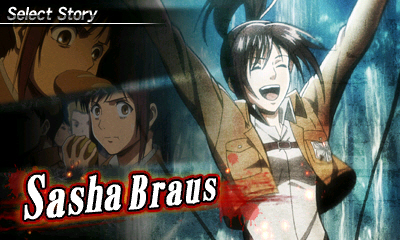 But in the World Mode (the Campaign), you can actually create your very own character. You can even customise it with voice sets, costumes, stats, abilities and equipment. But that’s not all: there’s also voices and costumes to unlock, so you can recreate your favorite characters from the manga/anime.

According to Michael Manzanares, you can upgrade pretty much every aspect of your character, but you have to make sure not to neglect important things such as melee strength, ranged accuracy, maneuverability, weapons and omni-directional mobility gear. What’s more, there’s also various building in the city that you can upgrade.

Attack on Titan: Humanity in Chains can be played alone, but also with up to three friends in local and online multiplayer. Pretty much everything in the World Mode can be completed alone, but Michael Manzanares recommends players try to go bring down titans with their friends. You can create individual squads, and there’s even pre-set chat options to communicate easily while in the heat of battle. 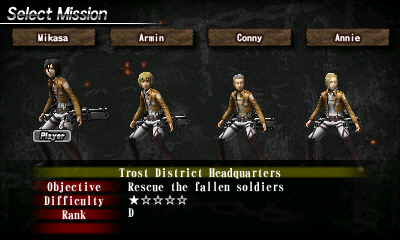 Those take place in various locations: at the Walls, within the city, beyond the Walls, etc.. During your missions, you will also get to gather intel on the Titans thanks to Scout Reports, and a Compendium with details about them (including some that are not found in the anime).

Attack on Titan/Shingeki no Kyojin: Humanity in Chains (3DS) comes out on May 12th in North America, and later this year in Europe.