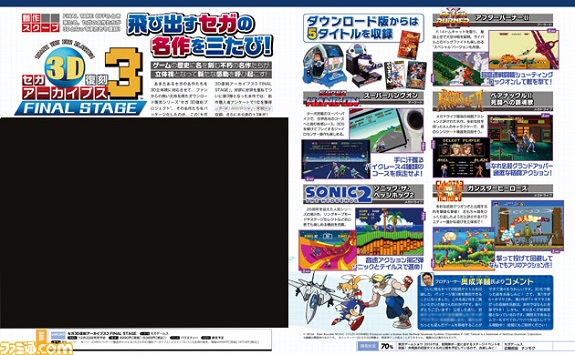 The results are as follows:

The collection will also include 5 other titles previously released via the Nintendo eShop (but not available in a previous collection): 3D Sonic the Hedgehog 2, 3D Afterburner II, 3D Streets of Rage 2, 3D Gunstar Heroes, and 3D Super Hang-on. We can also expect a couple of bonus games, like the previous collections! According to Famitsu, development is 70% complete.

Here’s the preview from Famitsu magazine (which conveniently hides what is most definitely the main artwork for the boxart, probably drawn by Ken Sugimori once again):

SEGA 3D Classics 3 (3DS) will be released on December 22nd in Japan. It’s a bit too early to say whether a European and/or North American release is planned or not.