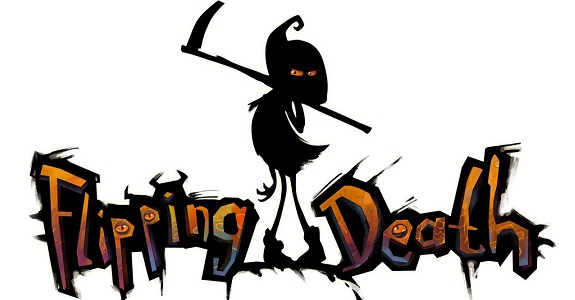 If you liked Stick It to the Man and thought that another game in that vein would be a great thing to have, you’re in luck! During today’s Nintendo Switch Nindie Showcase, a game called Flipping Death was revealed for Nintendo’s new console.

The game takes place in a small whimsical town called Flatwood Peaks, which has a rather deadly problem… Death is on vacation! You get to play as Penny, who has to help ghosts with her scythe. You can flip the world around to solve puzzles in both the world of the living and the dead, so that you can slowly uncover the mystery surrounding your own death.

Next, here’s the trailer for this deliciously wacky-looking game:

And here’s some screenshots and art for it:

For more details about Flipping Death, make sure to check out the interview over at Nintendo Life.

Also, Zoink Games confirmed that Zombie Vikings was also coming to the Nintendo Switch (maybe this Summer), and that Fe could be coming too (but nothing confirmed for that one right now, unfortunately).

Flipping Death and Zombie Vikings (Switch – eShop) could both come out later this year in Europe and North America. They have been added to the Upcoming Releases page and the list of confirmed games for the Nintendo Switch!