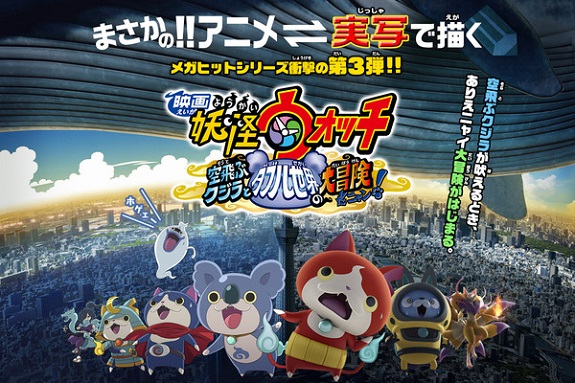 Last week, we learned that the third Yo-kai Watch movie would open on December 17th in Japan. Called Yo-kai Watch: Sora Tobu Kujira to Sekai no Dai Bouken da Nyan (lit. The Flying Whale and the Grand Adventure of the Double Worlds, Meow!), this third movie is a bit special: it features both animated and live-action segments (something Akihiro Hino already talked about in an interview a couple of weeks ago).

The cast is the same for the animated segments and the Yo-kai, but during the live-action segments, Keita Amano / Nate Adams will be played by Ryouka Minamide.

Curious to see what the mix of animation and live-action looks like? If yes, here’s some good news: the very first trailer for the movie is now available!

This trailer shows Koalanyan (another Jibanyan variant), a brand new Yo-kai which is apparently key to the movie’s plot.

Pre-sale for tickets will start on July 16th, and the 500 000 first fans who buy one will be able to get the following: