In July, a new Yo-kai Watch game will be released in Japan, but it won’t be Yo-kai Watch 3. Instead of the third entry in the mainline series, Level-5 is going to release Yo-kai Watch Busters, a spin-off based on the multiplayer component of Yo-kai Watch 2 Ganso / Honke / Shin Uchi. The game will be playable both online and locally, and will get two versions:

This morning, Level-5 revealed a 15-second commercial for the game, which shows a bit of gameplay.

But that’s not all Level-5 has up its sleeve in order to promote the game. In the June issue of CoroCoro magazine (coming out today in Japan), the publication of a manga based on Yo-kai Watch Busters (by Atsushi Ohba) will start.

Here’s a scan from CoroCoro magazine: 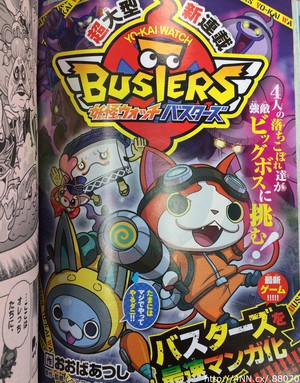 Finally, some bit of Yo-kai Watch news: starting on May 22nd, and for a limited time (2 weeks), McDonalds restaurants across Japan will distribute Yo-kai Watch cards with Happy Meals sets. Those cards are compatible with the Yo-kai Watch arcade game.