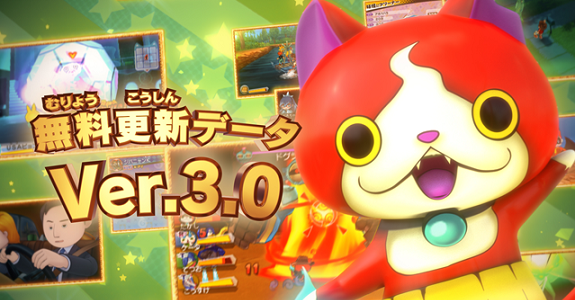 Last month, Level-5 announced that the next major update for Yo-kai Watch 3: Sushi / Tempura / Sukiyaki would be released in Spring, but didn’t specify when exactly. Today, the company announced that the udpate would be available pretty soon… this Friday, in fact! Some additional screenshots were also shared, to be found below.

This update brings all versions of Yo-kai Watch 3 (Sushi / Tempura / Sukiyaki) to Ver. 3.0, and “changes” the title of each version. Players can get an exclusive version of the Enma Daiou Yo-kai:

Thanks to this update, players can take on new quests, including one where you can befriend KJ, one that involves Fubuki-hime (Blizzaria) and her friends, and more. It looks like there’s some new version-exclusive quests, too.

There’s also some new rare and exclusive Yo-kai to check out:

Of course, there’s also some new Yo-kai found in all versions:

As for the Yo-kai Watch Busters-T mode, it’s also getting a brand new dungeon, with a new Guardian to battle against: Anahori Moguzou (with Bushi-ou and Captain Thunder also appearing as Guardians). The RPG mode is also getting two new areas: Nagizaki (a port town) and Kumamoto (a peaceful village in the mountains). It looks like you can even fly a toy helicopter.

Here’s a few more screenshots for the update (you can check out a trailer in this post):

And here’s the pictures from last month:

Yo-kai Watch 3: Sushi / Tempura / Sukiyaki (3DS) gets the Ver. 3.0 update on April 14th! The Upcoming Releases page has been updated.