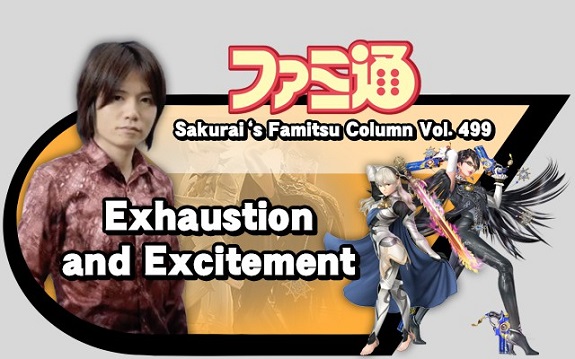 This week, the latest issue of Famitsu features the latest Sakurai column, and unsurprisingly, he talks about the last batch of DLC (released last week). He confirms that the development of Super Smash Bros. for Wii U and Nintendo 3DS is finally over, which means there’s no more DLC or any sort of extra content in development. He takes this opportunity to thank the developers for their hard work, and fans for their support.

Quite surprisingly, he reveals the title of his next game in the column: “Extended Vacation”. That’s right: after so much time spent on Super Smash Bros. for Wii U and Nintendo 3DS, Masahiro Sakurai can finally take some well-deserved rest.

In the column, he talks about the DLC characters, and how they all have unique mechanics and playstyles (with the exception of Roy and Lucas, obviously). The reason for that is because in Super Smash Bros., the fighters themselves are the source of excitement for fans.

After all, the fundamental rules of Super Smash Bros. haven’t really changed since the first game. Masahiro Sakurai didn’t go with 3D, or added new gauges, and the core gameplay is more or less the same. The reason for that is, as Sakurai puts it, “even if those ideas might create new excitement, those changes wouldn’t make the players happy”. So how do you get players excited? You do so with the fighters!

Here’s what Masahiro Sakurai had to say about his mindset when developing Super Smash Bros. for Wii U and Nintendo 3DS:

As a result, the mindset I had when developing this game was that the game’s “rules” are set in stone, but the fighters themselves are very flexible and allow for new, exciting elements. The fighters themselves become the sources of new excitement. That’s why the new fighters can do things the others cannot, to bring to life a number of battles that did not previously exist

Make sure to check the full translation of Sakurai’s column over at Source Gaming!

Finally, here’s one more trailer for Super Smash Bros. for Wii U and Nintendo 3DS, showcasing all the DLC characters: