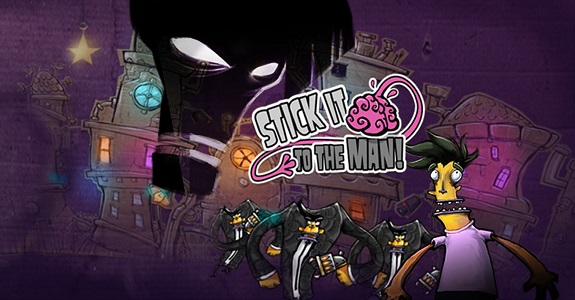 We already knew that Zoink Games were working on games for the Nintendo Switch. After all, the pretty promising Flipping Death was first revealed during the Nindie Showcase at the Game Developer Conference 2017, back in February (alongside Zombie Vikings). They’re also working on Fe (published by Electronic Arts), announced for the Switch at gamescom 2017.

But what we didn’t know (until this week that is) is that Stick It To The Man was also one of the games Zoink Games was bringing to the Nintendo Switch. It was originally released on Wii U, and was apparently requested by many players. Well, their requests have been heard, it seems!

If you’ve never heard of the game before, here’s what it’s all about:

Hard hat tester Ray has a bizarre accident and wakes up with a giant pink spaghetti arm sticking out of his brain! With his awesome new powers he can read minds and change the world with stickers, but he’s on the run for a crime he didn’t commit. Can you help Ray out of this sticky situation?

The game is said to have “close ties” to Flipping Death, though Zoink Games did not elaborate on this.

Here’s they key features of Stick It To The Man on Nintendo Switch:

Here’s the trailer for Stick It To The Man on Nintendo Switch: