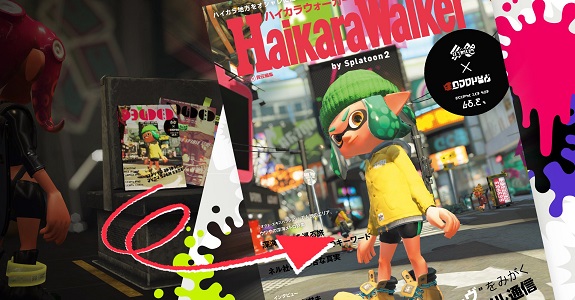 Today, the Squid Research Lab made an announcement regarding the Octo Expansion for Splatoon 2. On December 28th, the artbook for that meaty expansion will be released in Japan, as Haikara Walker (lit. Inkopolis Walker), presented as a fake fashion magazine coming straight from the Inkling world.

The best part? That “magazine” actually appears in-game, in the Deepsea Metro. The Squid Research Lab (who insists that this “artbook” is actually just a translation of the magazine) even posted a picture of the magazine cover on Twitter several months ago… talk about a sneaky teaser!

This artbook features various artworks and design documents for the Octo Expansion for Splatoon 2, and the additional content for the main game. It also includes two mangas that were drawn as storyboards for the expansion. But that’s not all: the book offers details about fashion designer Toni Kensa, a special interview with (fictional) graffiti artists, a pretty real interview with actual developers about Squid Beatz 2, biography of the band members of the various fictional bands, and more.

In Japan, fans who purchase the game via the ebten store will get a double-sided poster: a picture with all the shoes found in Splatoon 2 on one side, and a picture of Toni Kensa clothes on the other side.

Haikara Walker, the Splatoo 2: Octo Expansion artbook, will be released on December 28th in Japan. It will cost 2 200 Yen + taxes. It features 272 pages (A4 format). Unfortunately, it’s not clear whether there will be a western release later down the line or not.