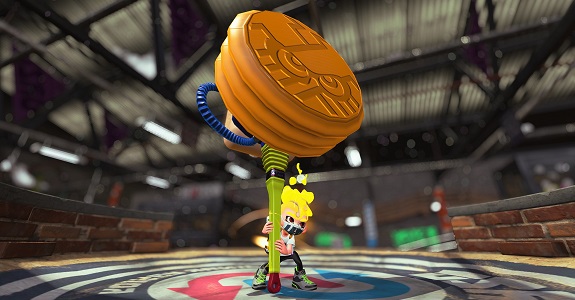 In the previous trailer for Splatoon 2, a mysterious Special Weapon was showcased, but it’s still not available in-game. And there’s a good reason for that: it will only be added to the game next week, on November 6th (North America) / November 7th, with Ver. 4.2.0 (like the past couple of times, the weapon update will follow 1 hour after the Software update). And thanks to the latest report from the Squid Research Lab, we now know this Special Weapon is called “Ultra Hanko” in Japan (lit. Ultra Stamp, English name TBC).

As you can see in the video below, when using this weapon, the player moves forward while literally stamping the ground repeatedly. It’s quite handy when moving into enemy territory, because it does block incoming attacks from the front (to a certain extent, it does not make you invicible). However, there’s a major drawback: it leaves you completely vulnerable from the back. Therefore, make sure you have some teammates to provide some cover when using it!

What’s more, you can rotate the weapon vertically, but also use it while in the air by pressing the ZR button during a jump. And if you press the R button, you can throw the weapon far away from you. Naturally, if you do so, the Special is over, so make sure to only throw the Ultra Stamp at the last second to avoid it going to waste.

Here’s a video showing the Ultra Stamp in action:

But that’s not all! The Squid Research has also shared details about a new Sub Weapon that will also be added with Ver. 4.2.0: the Torpedo. It’s a grenade-type weapon, which changes shape when thrown… before homing in on a nearby enemy. It explodes on impact, and splats ink everywhere. This does sound really handy when it comes to spreading chaos in enemy ranks, but be careful… opponents can shoot down your Torpedoes!

Here’s a video clip and some pictures for that new Sub Weapon:

The Ultra Stamp and the Torpedo will be added to Splatoon 2 on November 6th/7th!