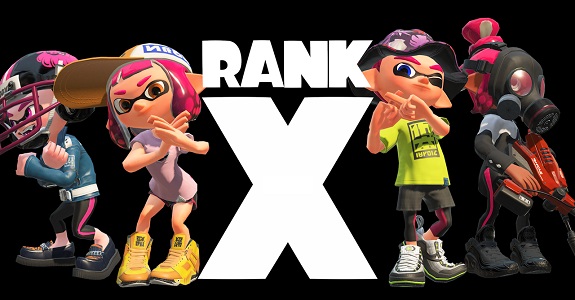 During the latest Nintendo Direct presentation, Nintendo shared details about the many changes, new features, and new content coming soon to the game (check out this post for more details, and especially this one for the Octo Expansion). One of them is Rank X: a rank even above Rank S+, that only the best of the best will be able to reach.

In a special report available on the official website in Japan, the Squid Research Lab shares some additional details about Rank X, but also other changes coming soon to Splatoon 2.

As mentioned above, only the best of the best will be able to reach Rank X in Splatoon 2. For reference, here’s the amount of players for each rank (as of March 4th 2018):

If you’re already Rank S+10 or above, you will be automatically promoted to Rank X when the Ver. 3.0.0 update goes live. If you’re not Rank S+10, you will be able to climb to Rank X by going up a rank from Rank S+9.

One thing to note about Rank X is that it uses X Power, instead of the usual Rank meter (which remains unchanged for Rank X players no matter how many battles they take part in). It’s pretty important for matchmaking, because only players with as close X Power as possible will be matched together.

Also, every month, the SplatNet 2 app will display the Top 500 Rank X players for each one of the 4 Rules (Splat Zones, Tower Control, Rainmaker, Clam Blitz). The app will also show the Rank X players that uses a specific weapon a lot, so that players can see who are the best Rank X players using the same weapons as themselves.

At the same time those rankings are published, the X Power will be “measured”. Players who are below a certain threshold will be demoted to Rank S+9, and will have to climb their way back up to Rank X. Also, if your X Power drops to a level way below the threshold during a given month, you may be demoted to Rank S+9 before the monthly reset.

No resting on your laurels: Rank X is a privilege you will have to keep fighting for, so don’t take it for granted!

Alongside Rank X, other changes will go live, starting with the addition of new weapons and maps. Up until now, new weapons were added on a weekly basis, and new stages once a month (not including stages for Salmon Run). But with Rank X, things are getting shuffled a bit.

But that’s not all. Currently, more than 20 stages can appear in one of the 4 Ranked Battle Rules. While this allows for lots of variety in the stage rotation, it also makes it hard for a specific combination of stages and rules to go live at the same time.

Of course, this specific change will not apply to Regular Battle and League Battle, where all stages will still be available as part of the stage rotation.

All those changes will go live when Ver. 3.0.0 is released, sometime in late April. The first Rank X reset is scheduled for May 31st at 5PM PDT / 8PM EDT (North America), June 1st, at 1AM BST / 2AM CEST / 9AM JST (Japan, Europe). After that, the reset will generally takes place on the 1st day of every month.

Finally, the Squid Research Lab explains that those changes are made so that players can enjoy (high-level) Ranked Battles seriously, instead of simply enjoying increasing their rank and leaving it at that.