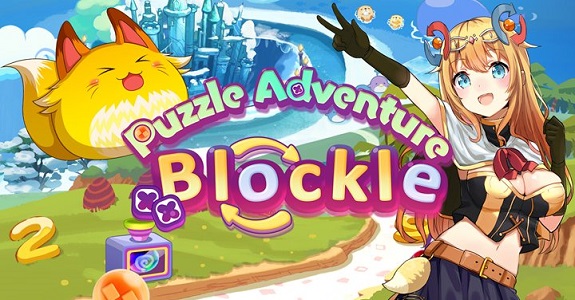 Intense has released quite a lot of Visual Novels/Adventure/Escape games on Nintendo 3DS (such as the Parascientific Escape series), but quite interestingly, their very first Nintendo Switch game is going to be… a puzzle game!

This game is called Puzzle Adventure Blockle, and it’s described as a Rotating Puzzle Adventure game. The goal of each puzzle is pretty simple: reach the exit (we did say it was simple!). Of course, it’s not as straightforward as we make it sound: you have to rotate the puzzle, to allow your character to reach that exit.

But just reaching the exit is just one part of each puzzle: there’s also various missions/goals to complete, such as getting a certain number of fragments, etc..

The game has a story mode, featuring Kulu (a Katz) and Arika (a young goddess) who set off on a journey in order to gather all 7 world stones. The former does it to help the mayor of his village, who is hell bent on world domination, while the latter is trying to recover her lost memories.

Here’s the trailer for Puzzle Adventure Blockle on Nintendo Switch:

Puzzle Adventure Blockle (Switch) will be released on August 3rd, worldwide. The Upcoming Releases page has been updated!