This week, Famitsu revealed some new characters for Project X Zone 2: Brave New World: click here for the full list of new playable characters (7) and enemies (4)! If that’s not enough for you, there’s nothing to worry about: Bandai-Namco updated the official website for the game this morning, revealing even more screenshots. You will find them all below, along with the screenshots from Wednesday in better quality!

But before that, some details about the stage show for Project X Zone 2: Brave New World at the Tokyo Game Show, next week. It will take place next week, on September 19th (Saturday), and will have the following participants/guests:

It will be streamed lived next on Bandai-Namco’s website, at: 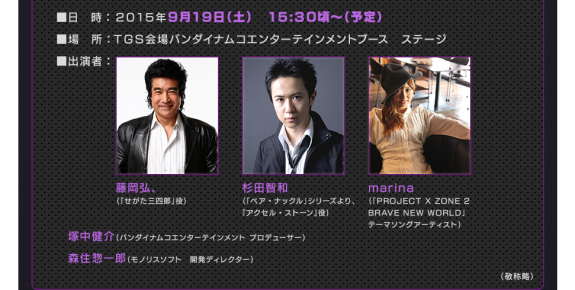 Project X Zone 2: Brave New World (3DS) comes out on November 12th in Japan, and early next year in Europe and North America.