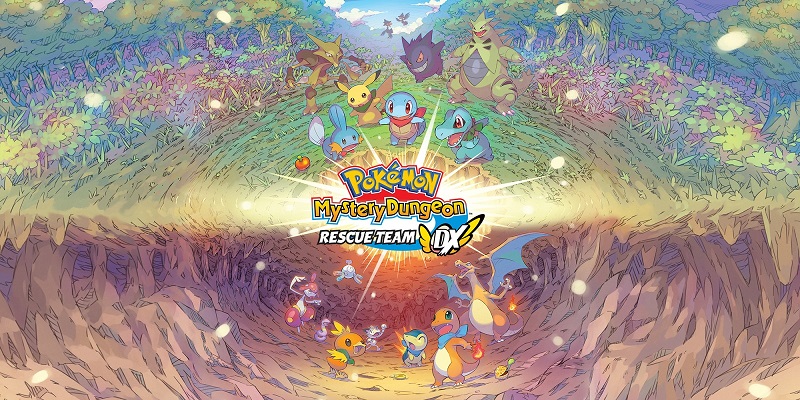 The Pokémon Company have shared a ton of details about Pokémon Mystery Dungeon: Rescue Team DX, which comes out next month worldwide.

In this game set in a world inhabited only by Pokémon, players will start their adventures by taking a personality test. They will wake up in the body of a Pokémon—either the one assigned to them based on their answers to the test or one chosen by the player. Throughout their adventures, players will encounter Pokémon who will join their rescue team to help other Pokémon who find themselves in trouble in different mystery dungeons. But players will need to be careful—each time they enter a mystery dungeon, the layout will be different!

Here are some tips to explore mystery dungeons.

Teams
Players can set out on adventures with teams of up to three Pokémon, and they can have multiple teams. Players should try to choose the team best suited for the dungeon they are exploring, keeping in mind the types of Pokémon they are likely to encounter in that dungeon. Pokémon who join players’ teams can stay in rescue team camps. Players can also change which Pokémon is the leader of their teams.
Throughout players’ adventures, they should try to obtain Rainbow Gummis and DX Gummis! These items can give Pokémon useful capabilities known as rare qualities. Rare qualities will have a positive effect on all rescue team members in a dungeon, helping players explore the area. Look out for rare Pokémon that have a rare quality from the start!

Battles
Like the main series Pokémon games, Pokémon in Pokémon Mystery Dungeon: Rescue Team DX can learn up to four moves that they can use to attack enemies, heal their party or apply some other special effects. Moves can also have different types and ranges.
But players shouldn’t forget to use items in battles, too! For example, Blast Seeds deal big damage after Pokémon eat them, while Gravelerocks can be used to attack from a distance, and Oran Berries can help Pokémon recover some HP. As with the layout of the dungeons, the kinds of items that appear and their locations will change each time players enter a dungeon.

Encounters
As players journey through Pokémon Mystery Dungeon: Rescue Team DX, they can encounter over four hundred Pokémon—including Pokémon that can Mega Evolve! Keep an eye out for Lucario, too! Once a member of a legendary rescue team that was said to be the strongest of all, this Pokémon now plays an active part in the game.

In Pokémon Square, players will meet a lot of Pokémon with personalities of their own.

Early game missions
Early in the adventure, players will be approached by Pokémon requiring their help. Among them are Dugtrio and Jumpluff.

Here’s the latest promo video for the Pokémon Ga-Olé game on Arcades: