On Thursday morning, a trailer for the 18th Pokémon movie (called “The Archdjinni of the Rings – Hoopa”) was shown during the Oha Suta show on TV Tokyo. A few hours later, The Pokémon Company uploaded a short version of it on its YouTube channel, but it wasn’t until this morning that the full thing was uploaded on YouTube.

Without further ado, here’s the official version of the full trailer for Pokémon The Movie: The Archdjinni of the Rings – Hoopa!

Every year, fans who go watch the latest Pokémon movie in theaters can get special Pokémon. Of course, this will also be the case this year: in fact, the first distribution has already started! By buying tickets for Pokémon The Movie: The Archdjinni of the Rings – Hoopa, fans can receive a serial code for Arceus (the very first distribution for this Pokémon this gen). But there’s a little twist…

There is actually 19 different Arceus that you can get: 18 of them were already announced beforehand, but it seems there’s one that was kept secret until today. It’s a very valuable Shiny Arceus: this is the very first time ever the Shiny version of this Pokémon has been available legitimately! Unfortunately, you can’t chose which Arceus you get: the download codes are completely random. 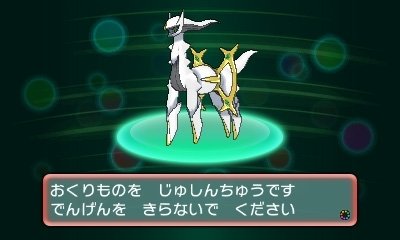 Pokémon The Movie: The Archdjinni of the Rings – Hoopa comes out on July 18th in Japan.