Two weeks ago, the Enter the Dragon Type competition was held for Pokémon Omega Ruby / Alpha Sapphire. If you entered, you can now receive your own Hidden Ability Amaura. The Pokémon is Level 10, has Snow Warning as its ability (allows it to summon a hailstorm in battle), and knows the following moves:

To receive it, simply head over to the Pokémon Global Link, click on the special page that pops up, and get your serial code. Then, launch Pokémon Omega Ruby / Alpha Sapphire and use the code in the “Mystery Gift” menu before May 31st. 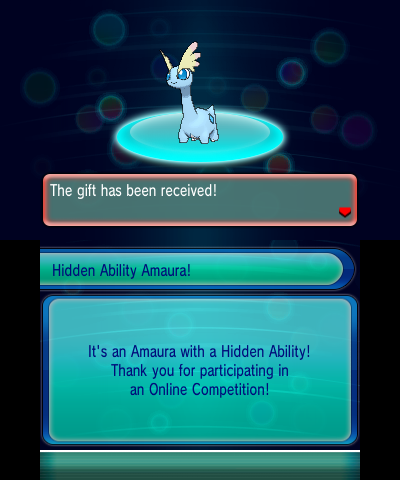 You have until tonight to register a copy of both Super Smash Bros. for Wii U and Super Smash Bros for Nintendo 3DS on your Club Nintendo account, in order to receive two free download codes for Mewtwo. The codes will be sent to you via email sometimes in Spring (the date has yet to be announced).