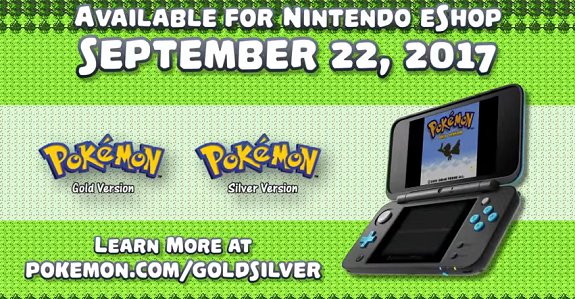 This week, during the latest Pokémon Direct presentation, Nintendo and the Pokémon Company made several major announcements for the Pokémon series. As many were expecting following the release of Pokémon Red Version / Green Version / Blue Version / Yellow Version: Special Pikachu Edition on the Virtual Console of the Nintendo 3DS, last year, it was announced that Pokémon Gold and Silver were also getting a re-release.

Even better: thanks to the “Time Capsule” feature, players will be able to Link Trade Pokémon between Pokémon Gold and Silver and Pokémon Red Version / Green Version / Blue Version / Yellow Version: Special Pikachu Edition. And of course, the two games will be compatible with Pokémon Bank, allowing you to transfer Pokémon to Pokémon Sun and Moon (and most likely Pokémon Ultra Sun and Ultra Moon too).

Here’s the debut trailer and some artworks for Pokémon Gold and Silver on Virtual Console:

Pokémon Gold and Silver (3DS – eShop) will be released on September 22nd worldwide. The Upcoming Releases page has been updated!