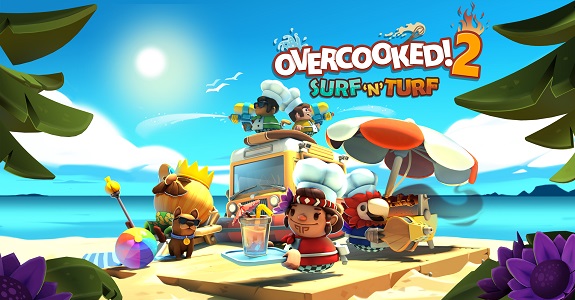 Overcooked! 2 was released back in August, and by now, you may have already gone through all the content has to offer. If that’s the case and you’re already hungry for more, here’s some good news for you: the Surf ‘n’ Turf DLC is now available!

This beach-themed DLC includes no less than 12 new campaign levels, but also new Versus and Kevin levels, new chefs, and new recipes for kebabs and smoothies. But that’s not all: the developers also added a water pistol, that can be used to put out fires, distract your fellow chefs, but also… something else (it’s up to you to find out what that mysterious feature is!).

Once you’re done with the new story campaign levels, do not let despair take over: there’s still more content to enjoy! It’s time to up the difficulty some more and tackle New Game+, where you can try and get a 4th star (the Expert Star) in each level. Of course, getting it is no small feat, and only the most hardened and seasoned of chefs will be able to get it!

But that’s not all New Game+ is about. It also features the following new features/improvements:

Finally, it has been announced that Overcooked! 2 is getting a retail release in Japan, on November 29th (courtesy of Pocket). This edition will cost 3 800 Yen.