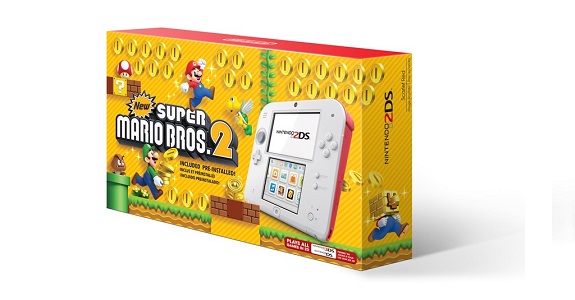 But if you thought that this new model meant Nintendo was going to focus exclusively on the New Nintendo 3DS XL and New Nintendo 2DS XL moving forward, you were wrong! Today, Nintendo announced that the 2DS was getting yet another bundle in less than a month, on August 25th to be precise.

This new bundle includes a copy of New Super Mario Bros. 2 (pre-installed on the SD Card, so a digital copy), and a White and Red Nintendo 2DS. But what’s really interesting about this bundle isn’t so much its contents (they’re nothing really special, as New Super Mario Bros. 2 has already been bundled several times), but rather, its price.

Indeed, this bundle costs only $79.99 (MSRP), making it by far the cheapest option for a Nintendo 3DS (not used). It certainly makes you wonder just how low the price is going to get, and if the New Nintendo 3DS XL is even going to get a price drop at one point (it still costs $199.99 MSRP, after all).

This new bundle for the Nintendo 2DS will be released on August 25th in North America. The Upcoming Releases page has been updated!