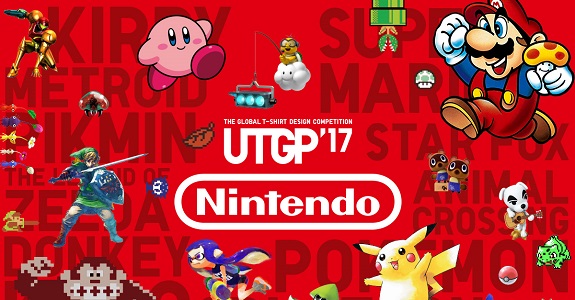 Last year, Nintendo and UNIQLO teamed-up for the UNIQLO T-shirt Grand Prix 2017. Fans were tasked with creating t-shirt designs based on Nintendo characters and series, such as Mario, The Legend of Zelda, Pokémon, or even Kirby. The contest was open to everyone, from all countries in the world, from all ages, gender, and nationalities, with a Nintendo Switch and some cash to win.

And today, the winning entries were finally revealed. Over 16 000 were sent for the UNIQLO T-shirt Grand Prix 2017, which the highest amount ever for the contest. As announced previously, Shigeru Miyamoto himself and the “Nintendo Team” went through all the entries in order to select only the very best.

Here’s a video introducing the various t-shirts based on the winning entries:

I was extremely surprised and pleased to receive such a prestigious award for my creation featuring one of Japan’s most renowned characters, Mario, as a motif. I would like to express my sincere gratitude to you all, including my family who supported me throughout. Thank you!

As someone who is trying to become a creator, I couldn’t be happier. I want to take away this experience and joyful feeling and reflect it in my future activities. Thank you very much!

As the first Mexican to win the prize, I feel extremely honored. I would like to express my gratitude to UNIQLO and Nintendo for giving me the opportunity to win the prize. I have been a fan of the games created by Mr. Miyamoto ever since I was a small child. Many years later, my creation featuring Zelda has been selected to be used on a UNIQLO T-shirt produced in collaboration with Nintendo. I feel as if my dream has come true. To the team of Nintendo, thank you for letting me be part of your world!

And here’s the other winning entries:

All the t-shirts from the UNIQLO T-shirt Grand Prix 2017 will be available from May 19th.