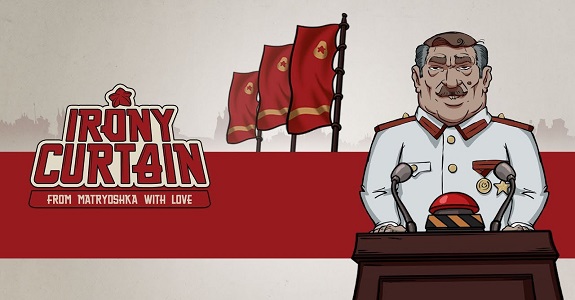 Every day brings its share of new announcements for the Nintendo Switch, and today is no different. Today, we have 1 brand new games and two more ports: Irony Curtain, Salt and Sanctuary, Surgeon Simulator CPR!

Irony Curtain is a a satirical point and click adventure game developed by Artfiex Mundi, and set in a totalitarian communist country. It features puzzles and mini games, along with “tricky scenarions” that require the use of “creative” combinations of items, and hand-drawn graphics. It will be released in 2019 on Nintendo Switch.

“Our glorious country of Matryoshka wishes to extend an invitation to the West, and allow them to witness the glory of communism first-hand. Visitors shall be the first outsiders to bask in the light of The Leader, who is the embodiment of all that is good and not the “demon, blood-drunk butcher, or godless dictator” non-believers would have you fear.

We welcome them to explore our beautiful country and political realm by solving puzzles and minigames to understand the depth of corruption surrounding the magnanimity of our fearless leader. This sponsored visit includes a meeting with our Minister of Propaganda Communication, Vlad. The Minister’s job is completely unnecessary, but our country has zero tolerance for unemployment because it shows the West that we are stronger than them.

While our guests aren’t busy submitting themselves to unnecessary strip-searches, they will try to finagle their way through tricky scenarios using creative combinations of items. Our gorgeous, colorful hand-drawn country ensures that foreign eyes will always bask in the glory of our people and natural splendor. It is our hope that these beautiful images draw their eyes away from our impoverished wealthy citizens so they do not try to steal our secrets.”

Irony Curtain (Switch – eShop) comes out next year in Europe and North America. The Upcoming Games page has been updated!

Salt and Sanctuary is a popular “brutal hand-drawn 2D Soulslike platformer”, and it’s now headed to the Nintendo Switch courtesy of BlitWorks. It will be released on August 2nd in Europe and North America, and will cost $17.99. It will offer the following language options: English, French, Italian, German, Spanish, Traditional and Simplified Chinese, Japanese, and Korean. For those of you interested in a physical copy of the game, the Salt and Sanctuary: Drowned Tome Edition will be released later this holiday season.

Here’s a trailer and more details:

While sailing across a stormy sea to transport a princess and strike a truce between rival kingdoms, a calamitous encounter with a sinister abomination wrecks the player’s ship. Upon drifting onto the shore, the journey to broker peace dissolves into a struggle for survival on a treacherous island rife with undead.

Whether braving this alone or with a friend via local co-op, the customizable hero, known as the Saltborn, can only persevere by navigating this grim, forgotten bastion. Pressing on and cleaving through anyone or anything that rears its malformed head is the only way forward. Hidden platforming abilities including air-dashing and wall-jumping help the Saltborn find and eradicate more than twenty horrifying bosses all drawn in Ska Studios’ stylized signature art style.

Discovering the truth behind this cursed land necessitates both a keen eye and a bloodlust, but all manner of implements of death await adventurers. All character builds are worthy: a whip-wielding, crossbow-brandishing bandit and sorcerer wreathed in Fire and Sky magic have equal chances of survival. Sixteen weapon types and more than fifty sets of armor that both strengthen the Saltborn and visibly change their appearance can be upgraded with the right equipment. A massive skill tree provides further options for progression.

Battles play out in a tough-but-fair fashion. Every swing of the sword drains stamina, so calculated attacks often win out over desperate flails. Magic wielders have their own tribulations: all of the games’ spells align with either Fire or Sky elements and casting too much of one causes an imbalance that damages the Saltborn. Holy Prayers don’t have an element but offer defensive boosts. Each harrowing skirmish rewards patience.

Salt and Sanctuary (Switch – eShop) comes out on August 2nd in Europe and North America. The Upcoming Games page has been updated!

In order to celebrate its 5th Anniversary, Surgeon Simulator (the infamous operation “sim”) is getting a Nintendo Switch port this Fall. This version of the game is called Surgeon Simulator CPR, with CPR standing for “Co-op Play Ready. Naturally, it does offer motion controls, and is compatible with HD Rumble (allowing you to really feel your tools: hammers, hatchets, buzzsaws, laser pens, and more. You can also share a pair of Joy-Con with a friend in order to start operating in co-op at any time.

Surgeon Simulator CPR includes all the operations from the original version, but also the additional teeth and eye transplants from the A&E Edition, and the highly-classified Alien Autopsy mode.

Taking on the role of Nigel Burke – a would-be surgeon with a less-than-conventional toolkit – the game sees players perform terrifying transplants in theatre, high-pressure procedures in an ambulance, and anti-gravitational operations in space!

Surgeon Simulator CPR (Switch – eShop) comes out this Fall in Europe and North America. The Upcoming Games page has been updated!