Today’s Nintendo news: Animal Crossing: New Horizons to get cloud save data back up, but also…

Nintendo have updated the official website for Animal Crossing: New Horizons in Japan, providing some additional details about the game. First: save data. As expected, the game will not be compatible with the Cloud Save Data back-up feature from Nintendo Switch Online, and save data cannot be transferred to another console either.

However, Nintendo have announced that they are working on a back-up system for Nintendo Switch Online users, that will allow them to back up their save data in the cloud, in case something happens to the console (theft, damage, etc.).

Unfortunately, it’s not clear when this system will be implemented (the wording implies it will not be ready at launch), or how it will work. All we know so far is that you will need a Nintendo Switch Online subscription, and that there will most likely be restrictions (like how often you can download the save data back up).

Want to win a trip to Universal Studios Japan for an exclusive preview of Super Nintendo World (set to open this Summer)? If yes, you might want to check this website on February 7th (8AM PT / 11AM ET), in order to register for the Super Nintendo World Challenge that will be held at the Nintendo NY Store on February 19th. There will be a live-action stage, but it’s not clear what it will be about just yet. 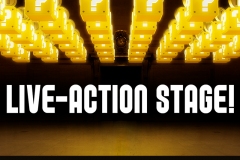 A few things to keep in mind:

Nintendo have sent two statements regarding the Coronavirus outbreak currently impacting China. Because of it, production for the Nintendo Switch and accessories (such as the Joy-Cons), but also Ring Fit Adventure, is going to be impacted. As a result, shipments for the Japanese market are going to be delayed, which is inevitably going to cause or worsen shortages in that country.

And that’s not all: since the recently announced Animal Crossing: New Horizons bundle is also going to be impacted, Nintendo have confirmed that pre-orders for it and the special cases will not go live on February 8th in Japan as previously announced. Nintendo specify that the game itself is not impacted, and pre-orders (including digital) will go live on February 8th in Japan. The game itself is not delayed, and even the bundle is still slated for a March 20th release in Japan… for now.

Right now, it’s not clear whether this is going to have an impact on shipments for Europe, North America, and other regions, but considering all consoles and accessories are manufactured in China, there’s little doubt Japan is not going to be the only country impacted in the end.