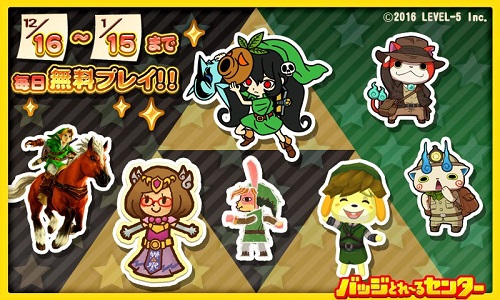 Yesterday, Nintendo added the following to the Nintendo Badge Arcade in Japan:

Here’s some screencaps for those badges, courtesy of Joe Merrick:

Here’s the usual pictures and video for the latest Splatoon Koshien 2017 tournament, which was held on December 17th and 18th at the Jump Festa 2017:

The next and final tournament will take place on January 21st and January 22nd in Tokyo, at the NicoNico Headquarters. After that, there will be the big finale at the Game Party Japan 2017, in February!

Yesterday, Famitsu released a guidebook for Super Mario Maker for Nintendo 3DS in Japan. It costs 1 404 Yen, and includes details about course parts, explanations for creating levels, and even a guide of the 100 levels (+ how to get their medals) Nintendo created for this handheld version of the game.

Here’s the cover and some preview pages:

Earlier this week, Nintendo announced the Nintendo Internship 2017, aimed at students who want to learn more about what working at Nintendo is like. This year, there will be three courses:

You can find more details about the Nintendo Internship 2017 on this page. Since this is only for people living in Japan, the page itself is only available in Japanese!