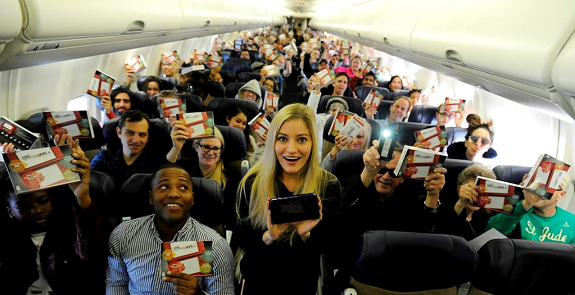 A few years ago, Nintendo and Southwest partnered for a promotional stunt, that saw more than 100 passengers from a Southwest flight get a free Wii U and games. And last week, the two companies did it again, this time with a New Nintendo 3DS XL and Super Mario Maker for Nintendo 3DS.

It all happened on December 14th, at 10 000 feet in the air: passengers on Southwest flight #2482 suddenly heard Mario’s voice, announcing the surprise. A few minutes later, they received a New Nintendo 3DS XL and a download code for Super Mario Maker for Nintendo 3DS. But there’s more: some Nintendo reps also arrived to help passengers get the hang of the game, and among them was none other than iJustine.

Here’s some pictures of the promotional stunt:

This was all part of the Say Yes to Nintendo 3DS promotional campaign, that runs until January 14th in the United States. There are Nintendo 3DS games and consoles to win, along with a Grand Prize including:

This all sound pretty exciting to you? Click here to enter the sweepstakes!!