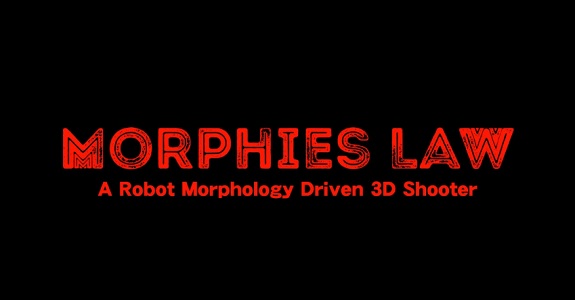 There isn’t that many shooters on the Nintendo Switch, especially one as unique as the one announced during the Nindies Summer Showcased on Wednesday: Morphies Law. The developers introduce it as a “robot morphology driven 3D shooter”.

Now, what do they mean by “robot morphology driven”, exactly? Well, it’s pretty simple: the game has a basic “law”, that makes it so that each weapon hit transfers mass from the victim’s limb to the corresponding limb of the shooter. For example, if you hit an enemy on the head, their head will become smaller, while yours will grow bigger.

This has various consequences, the most obvious one being skilled players becoming taller (and therefore easier to hit), while less skilled players become harder to hit due to their reduced size. That way, everyone can enjoy the game together, regardless of their skills.

Another consequence of the limbs changing size is that this directly affects what you can and cannot do. For example, a player with tall legs can jump on buildings, while a small one can hide in tiny holes. What’s more, your size also has a direct influence on some of your abilities, such as the butt-rocket (that will not behave the same if you’re tall or small). To become a skilled player, you will need to adapt your playstyle to your size.

This also applies to your team: a successful one builds its strategy around the body size of its members. The thing is, friendly fire does not damage the team’s avatar (which also grows in size when you hit opponents), so you can shoot a teammate to make them smaller and allow them to go through small passages for example. Using friendly fire to your advantage is key to victory!

Finally, here’s a trailer and some pictures for Morphies Law on Nintendo Switch:

Morphies Law (Switch) will be released this Winter in Europe and North America. The Upcoming Games page has been updated!