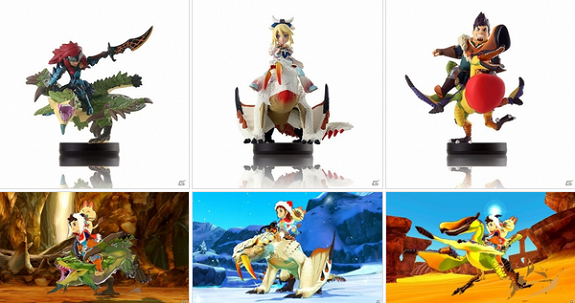 Update: we just added some new screenshots and artworks for the game. You will find everything below!

Back in May, when Capcom finally revealed new details about the game, it was announced that Monster Hunter Stories would get not one, but three amiibo figures. It was the first time ever a major third-party publisher created their own amiibo figures (something Nintendo has been open to from the beginning), but not the first third-party amiibo (that’s Shovel Knight, from Yacht Club Games!).

And today, Capcom announced that Monster Hunter Stories would get a second wave of amiibo figures, on December 8th. This time, the amiibo are based on the following characters:

Just like the two amiibo for the protagonist, you can actually remove the character from the monster. That way, you can have any combination you want: Protagonist + Rathian, Ayuria + Rathalos, or even Dan + Barioth.

Here’s some pictures for this second wave of Monster Hunter Stories amiibo, which will cost 1 800 Yen (+ taxes) each:

Monster Hunter Stories (3DS) and the first wave of amiibo releases on October 8th in Japan. The second wave of amiibo will be released two months later, on December 8th. Our Upcoming Releases page will be updated momentarily!