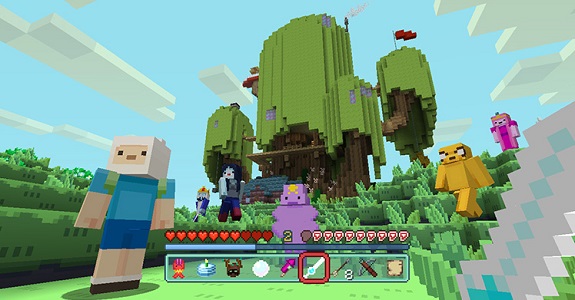 A few days ago, it was announced that Minecraft: Wii U Edition and Minecraft: Nintendo Switch Edition would soon get a new, major bit of DLC: the Adventure Time Mash-Up Pack. Since it’s a Mash-Up pack, there’s a lot of content included, not just a bunch of skins.

The Adventure Time Mash-Up Pack for Minecraft: Wii U Edition and Minecraft: Nintendo Switch Edition includes several characters/skins, such as Finn, Jake, Ice King, Marceline, Princess Bubblegum (and a lot more), but also new maps with the Candy Kingdom, the Ice Kingdom, the Fire Kingdom, and a lot more. You can find more details about the pack thanks to the interview to be found at the source link below!

This new Mash-Up Pack will be released later today (in North America) / early tomorrow (in Europe and Japan), and will require the latest Software updates for the game. You can find detailed patchnotes in the following two posts:

Do note that the Adventure Time Mash-Up Pack isn’t the only bit of DLC releasing this week. Both versions are getting the following:

Regarding the Magic: The Gathering Skin Pack, it includes skins based on some of the most iconic cards ever, such as Liliana Vess, Ajani Goldmane, or Avacyn.

Here’s a trailer and some pictures for that Skin Pack:

On Nintendo Switch specifically, the developers finally added the various bits of contents and features that were missing, bringing this version inline with the others.