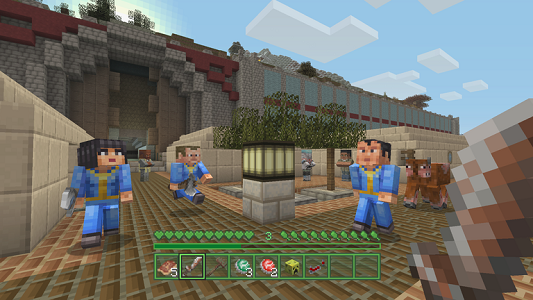 And today, Mojang announced that a new one would soon be released for Minecraft: Wii U Edition pretty soon (most likely next week), based on the Fallout series. It will feature a special map, transforming the game’s overworld into an irradiated wasteland, where familiar landmarks such as the Capitol building or Tenpenny Tower can be found.

Players will also come across strange cows with more heads than necessary, overgrown arachnids with brutal stingers, and other mobs of terrifying mutating creatures (ghouls, mutants, and madmen).

The Fallout Mash-Up Pack for Minecraft also features 44 skins based on characters from the Fallout series, such as:

The developers went as far as give the UI a retro-futuristic overhaul, with the iconic Pip-Boy. Finally, the Mash-Up Pack includes a special soundtrack.

According to Mojang, the Fallout Mash-Up Pack for Minecraft: Wii U Edition will be available “soon” (most likely next week, following the maintenance period), and will cost $5.99 / 5.99€.