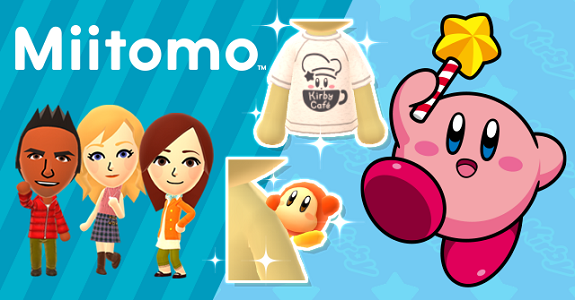 Update: the retweet campaign has achieved its goal, which means that all players will get the Kirby Café t-shirt on Friday (Thrusday evening in North America)!

After The Legend of Zelda, Metroid, and even Super Mario, Nintendo has announced another promotional campaign for Miitomo. This time around, it’s with the Kirby series… including the popular Kirby Café! The campaign uses the same format as the other, with several “events” and rewards.

First, we have a Kirby Café t-shirt, that all Miitomo players will automatically receive if the tweets below are retweeted at least 20 000 times worldwide (combined), and before September 13th. Make sure you don’t include a comment in your retweet, though, or it will not be taken into account.

Here’s the tweets to Retweet:

If the campaign is successful, the t-shirt will be available in Miitomo from September 16th to October 13th (from the gift box).

Next, we have a Kirby Hat, that all Miitomo users will be able to claim from their gift box from September 16th to October 13th… without having to do anything!

Next, there’s two Miitomo Drop stage that will be added to the game on September 16th (and will be playable until October 13th):

Next, there’s two T-shirts that will be added to My Nintendo on September 16th (and will remain available until October 13th). The first one features the Robobot Armour from Kirby: Planet Robobot, while the second one sports a pretty cute artwork of Kirby and Qbby (from BoxBoy!). They have been added to our My Nintendo Rewards page!

Finally, there’s a Kirby Companion, which will be added to the Miitomo Shop on September 16th (it will be removed on October 13th).