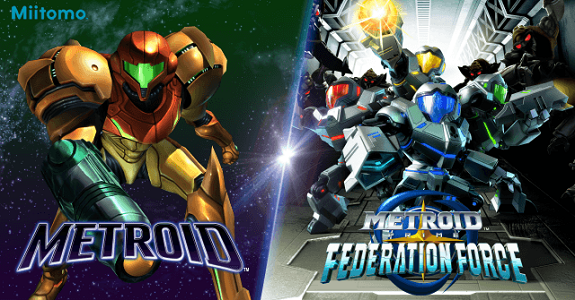 Since Miitomo launched in March, Nintendo has used it for several promotional campaigns with its own franchises, such as Splatoon and The Legend of Zelda. At to coincide with the launch of Metroid Prime: Federation Force, Nintendo has launched one for the Metroid franchise, also celebrating its 30th Anniversary this year.

As usual, there’s various goodies, ranging from free clothing items to new My Nintendo rewards, and more. Here’s everything you can get for a limited time:

1. Metroid Hat and 8-Bit Samus T-Shirt items for everyone!

Starting today, you can get some free Metroid-themed clothing items, such as:

Two new Miitomo Drop stages are available, and allow you to get some Metroid clothing items for your Mii. They’re available until September 15th (8AM PST / 11AM EST / 4PM BST / 5PM CEST / 12AM September 16th JST).

Some new Miitomo rewards are available in My Nintendo:

Our My Nintendo and Miitomo Content Updates pages will be updated momentarily!