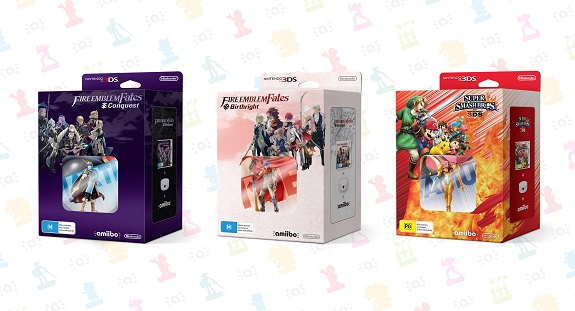 Today, Nintendo announced three new amiibo bundles for Australia and New Zealand. They will be released on September 22nd, and will cost AU$69.95. Here’s what you will find inside:

Here’s pictures of the packaging of the amiibo bundles, courtesy of MightyApe (1 / 2 / 3):

Earlier this week, Nintendo announced that three new colours for the New Nintendo 3DS XL would be released in November in Europe. And As explained, Australia and New Zealand are only getting two colours: Orange + Black and Pink + White.

Thanks to MightyApe (1 / 2), we have pictures of the packaging and the consoles for two of the colours:

Those new colours for the New Nintendo 3DS XL will be released on November 11th in Europe.