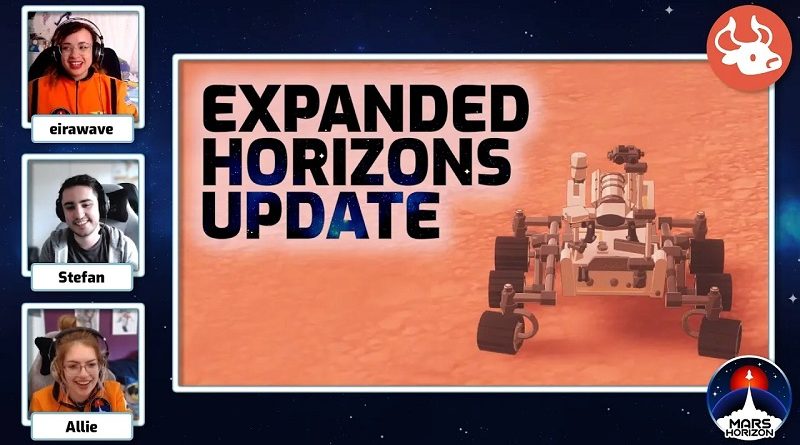 Next week, Mars Horizon is to get a pretty meaty Software update called Expanded Horizons Update, which adds a brand new sandbox mode, a new ultra hard mode, new missions, and more. It will be released on June 22nd in Europe and North America. On the same day, a demo version will be released on the Nintendo eShop!

If you want to see the contents from that update in action, then make sure to check out the recording of the latest Auroch Digital livestream:

We’ve added a new mission which includes the Perseverance Rover and the Ingenuity Helicopter, y’know, that mission that NASA recently sent to Mars? You can now play that mission yourself in Mars Horizon!

We’ve also added a reusable Wyvern Upper. This is an awesome addition to the game because we’ve been able to demonstrate some of the new reusable vehicle tech which is moving into the mainstream in real life space exploration. If you do well enough to unlock the Wyvern Upper, you’ll be able to re-use it which will save you both time and money! Keep an eye out for the brand new cinematic for this too, we’re really proud of it.

HIGHLY requested by the community, we’re now offering a Sandbox Mode for Mars Horizon players! You’ll be able to access Sandbox Mode from ‘Customise Experience’ in the main menu, meaning you really can experience Mars Horizon however you want.

We’ve added a new special game mode where you can’t cheat by save-scumming. Iron Core mode will save after EVERY SINGLE TURN whether you want it to or not. Like with Sandbox Mode, a save icon will identify these Iron Core saves to help differentiate it. This is the toughest way to play Mars Horizon to date, there’s no going back!