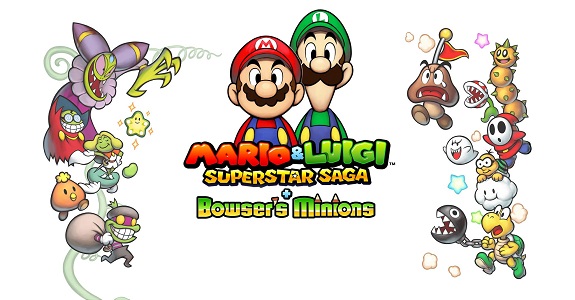 Today, Nintendo opened the official website for Mario & Luigi: Superstar Saga + Bowser’s Minion, providing us with plenty of details about the game, but also some gameplay footage, screenshots and artworks, and more. The game is also available for pre-purchase on the Nintendo eShop in Japan!

But first of all, here’s the Japanese overview trailer for the game:

The segment from the Nintendo Direct:

One day, Princess Peach welcomes the goodwill ambassador of the Beanbean Kingdom… but it turns out it was an evil witch, called Cackletta! She steals Princess Peach’s voice, and naturally, Mario and that green guy (what’s his name again?) go on an adventure in order to get it back. But they’re not alone… it looks like Bowser and his minions are also on board!

As you probably already know, this is a remake of Mario & Luigi: Superstar Saga, a RPG released in 2003 on GameBoy Advance. It offers, puzzles, battles, and a healthy dose of humour. It takes place in the Beanbean Kingdom (located right next to the Mushroom Kingdom), and features the famous brothers: Mario and What’s-his-name-again?!

Princess Peach’s voice is stolen by the evil witch Cackleta, but who knows why she did that and why she needed the Princess’ voice… But for Mario and Green Mario, there’s only thing to do: go after the witch and get the voice back. Oh, and for some reason, Bowser and the gang are also on board, and even cooperate with the two brothers… but for what reason?

Here’s the main characters of the game:

The gameplay in this game relies on two buttons:

There’s various actions you can perform while exploring the world, such as Jumps, using a Hammer, and more. There’s also special actions known as Bros. Actions, where the two brothers combine their forces:

The basic actions listed above are also used in battle, and they’re the very basic attacks. Just like in the exploration phases, the A and B button are tied to their respective characters (Mario and Not-Mario).

To defeat enemies, you can use regular Jumps, or use the Hammer. Just think carefully about which attack to use, depending on the enemies you’re facing… don’t you try and jump on that spikey thing! But battles are not only about attack: you can also evade enemy attacks, or block them if you’re not confident enough (you will take less damage than by tying to evade, but failing and getting hit).

The two brothers can also use special combo attacks known as “Bros. Attacks”, which are significantly stronger than regular ones. There’s 16 of them in total, and mastering them all will be key to victory. If you press the buttons with just the right timing, the Bros. Attacks become more and more powerful.

There’s some features to help players not confident enough to make it through battles:

And if you’re really struggling with a particularly tough enemy or boss, you can activate Easy Mode: if you fall in battle, you will be revived on the spot, and Mario and his brother will get power up.

This remake of Mario & Luigi: Superstar Saga features a brand new mode where you get to control Bowser’s very own minions. It features a Goomba as main character, and over 50 characters. The best thing? You can play it even without touching the main game, which is great news for those of you who already finished the original game on GameBoy Advance.

In this mode, you need to choose a leader for your army, and you have the choice between the following:

Before battle, you need to think carefully about which units to bring with you in battle, depending on the enemies you’re facing.

There’s several ways to power up your units. Each one has Skills, that allow you to enjoy bonuses in battle (such as increased attack or HP for example). By making the right combinations, you could get the upper hand in battle before it’s even started…

Now, on to the battle system itself. Naturally, the goal of each battle is to defeat all the enemy units before they do the same with yours. To do so, you can use special moves: when you see a ! above a unit’s head, that means you can use one by pressing the right button. As you can imagine, winning battles without those special moves is going to be pretty tough (if not downright impossible).

There’s also Leader Actions: special moves that only the leader of your Army can pull off. They all have their own moves, that are gradually unlocked as they level up.

One thing to keep in mind is that your units can level up thanks to the XP gained in battle. You can also get special items to strengthen your units, such as Super EXP Beans S for example.

As you progress through the game, you get access to more type of units, such as a special green Shy Guy and the Koopalings.

In case you were wondering: yes, Mario & Luigi: Superstar Saga + Bowser’s Minion is compatible with amiibo. Using compatible figures, you can raise units for your Army (in the Bowser’s Minions mode), but also get items and stamps (in both modes).

You can raise units, and save the data on the amiibo. When you tap it on the bottom screen, you get a stamp. There’s various stamps to get, based on the data stored in the amiibo (units, level of said units, etc.). After that, when you touch the stamp, you can get various items in the main story and the Bowser’s Minion mode. You can also get a Friend Bonus if a friend also has the game.

A quick note about the stamps in the main story: the character to talk to in order to get the items can only be found in a certain town, after progressing far enough in the story.

But that’s not all: in the Bowser’s Minions mode, using amiibo allows you to get a special gold leader, which is slightly stronger than the regular ones. You can also enjoy some additional battles.

The features described above are for the Goomba, Koopa, and Boo amiibo. But it turns out the game is compatible with other amiibo from the Mario series.

If you have a Japanese Nintendo 3DS, you can now pre-purchase and download the game right now. That way, you will be able to start playing at 10PM JUST on October 4th!

Here’s some “technical” details about the game: