As announced during the April 1st/2nd Nintendo Direct, the second DLC pack for Mario Kart 8 comes out today worldwide (Japan, Europe and North America). But before players can enjoy it, they will have to download the new Software update that was just released by Nintendo. It requires 247MB (Europe).

It brings Mario Kart 8 to version 4.0 and includes the following changes:

(This post will be updated when the official changelog is available in English).

– let the console do its thing if you have automatic downloads activated;
– update manually by launching Mario Kart 8 from the Home menu (not via the Quick Start menu, as it bypasses the update check-up).

As for the DLC, it is available as a separate download. It requires 972MB of free space on your Wii U or external HDD. You can download right from the game’s menu, provided you have bought it beforehand. 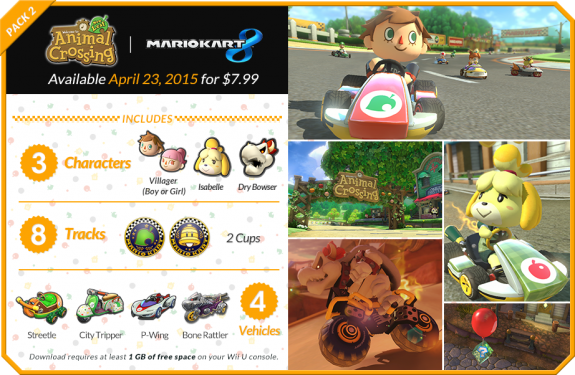 Source: Nintendo
Thanks Robin64 for the list of Miiverse stamps.