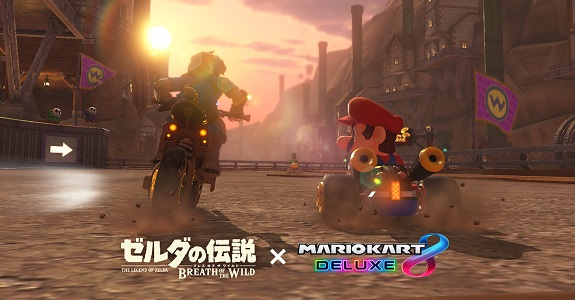 Earlier today, Nintendo released a brand new Software update for Mario Kart 8 Deluxe (Ver. 1.6.0). This is no mere bug fix update: it actually adds some extra content from The Legend of Zelda: Breath of the Wild, such as a new version of Link, but also the infamous Master Cycle Zero and some accessories (Paraglider and Ancient Tires).

Following that, Kosuke Yabuki (Producer of the game) wrote a few words on the official The Legend of Zelda portal in Japan, in order talk about how this project came to be.

But first, some details about the Link from The Legend of Zelda: Breath of the Wild. When he does a Jump Action, he waves a Guardian Sword++ around, instead of the Master Sword. And when he glides, it’s the Paraglider that he uses. Of course, he’s not tied to the Master Cycle Zero: he can also drive regular karts and bikes!

The opposite is also true: plenty of developers who previously worked on The Legend of Zelda series have experience with Mario Kart games. He explains that they are all coworkers, who happen to work on the same floor, every day.

He remembers that one day, Eiji Aonuma came to see him, and told him: “I’m thinking of putting a bike in The Legend of Zelda: Breath of the Wild. What do you think?”. He immediately replied that this would be the highest place ever anyone could drive a motorbike in.

Back when the second DLC Pack for The Legend of Zelda: Breath of the Wild was launched, Eiji Aonuma wrote a blog post explaining how they came to add such a thing as a motorbike in a Zelda game, and how they created it.

As one can imagine, it definitely was unusual for the team to add a motorbike in Hyrule and especially to do so after the fact, after the world had already been created. They also had various things to take into accounts, such as the feel of tires on the ground, the design of the motorbike (created using ancient technology), the sound of the engine… Kosuke Yabuki believes that it was quite the challenge for the development team.

After playing “The Champions’ Ballad”, Kosuke Yabuki thought that he would definitely love to see the Master Cycle Zero in Mario Kart 8 Deluxe. And that’s how Link’s first canon motorbike ended up in the game!

Naturally, they modified the bike so that it would fit the world of Mario Kart 8 Deluxe. For example, the wheels turn on their side during anti-gravity sections (as you can see in the screenshots below). They also paid particular attention to the design of the mechanical parts and the Paraglider’s cloth, to make them look as close to the original as possible.