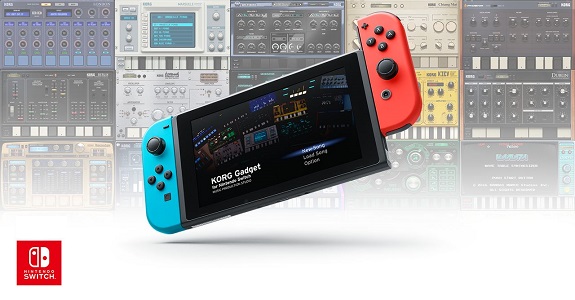 Last year, KORG announced they would be bringing one of their music creation software to the Nintendo Switch. It’s called KORG Gadget for Nintendo Switch, and it will be released this Spring via the Nintendo eShop. It’s developed and published by DETUNE.

Today, the official website was updated, and provides quite a lot of details about the software (but still no release date). For those who never heard of it before, KORG Gadget for Nintendo Switch is introduced as a “Music Creation Studio That Feels Like a Game”, and it brings the award-winning music creation software to the Nintendo Switch.

It gives access to plenty of different “instrumental gadgets”, via a “simple and intuitive graphical interface”. The goal is for users to start making their own music easily and quickly. What’s more, this version of the game will allow users to both create and perform music by using the motion controls of the Joy-Con.

But that’s not all: it also offers a multiplayer mode, where up to 4 people can collaborate in making awesome music. And by putting the Nintendo Switch in its dock, you will be able to use the software on your TV, but also on a big screen using a projector.

As mentioned above, the software offers an intuitive user interface, with the Sound, Phrase, Sequence, and Mix functions contained in an intuitive layout. You can also set the interface to Scale Mode, in order to match the song. According to the developers, even people not accustomed to synthesizers will be able to enjoy creating songs.

In total, the software includes 16 unique synthesizers and drum machine gadgets, that you can use to create your music. The drum machines (said to be “ready-to-use”) and the Kamata were jointly developed with Bandai-Namco. All gadgets offer “sophisticated” adjustable parameters.

KORG Gadget for Nintendo Switch takes full advantage of the Joy-Con, and even goes as far as supporting HD Rumble (offering great tactical feedback). About motion controls, they allow you to turn the knobs on a gadget, play the notes of a scale that matches the song (by twisting the controller), and more. Naturally, you can use “traditional” controls with the buttons and stickers, if you prefer.

About the multiplayer mode mentioned above, it allows you to create music with up to 4 other players. In this mode, all 4 players play simultaneously, with the screen divided in 4 parts. You can choose to have each player be responsible for their own parts, or have a competition instead.

For multiplayer, you need 4 sets of Joy-Cons to play. Unfortunately, local and online multiplayer are not supported: you can only play with your friends on the same console.

Finally, KORG confirms that the software can be used in all 3 modes: TV, Handheld, and Tabletop.

Here’s some pictures for KORG Gadget for Nintendo Switch: