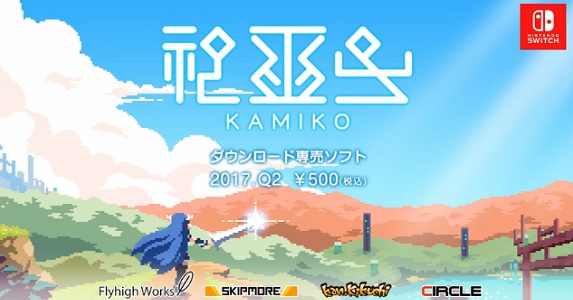 Kamiko is the latest game from Kan-Kikuchi and Skipmore, the developers of the fan-favorites Fairune and Fairune 2. It’s an action-RPG with a pretty neat retro aesthetic, which was released last week in Japan (just after the Nintendo Direct presentation). The game is already playable in English, if you buy it from the Nintendo eShop using a Japanese Nintendo Account.

But those who don’t have such an account (or simply prefer to buy games from their own region) will soon be able to buy the game. According to a listing on the Nintendo eShop and Nintendo’s website, Kamiko will be released next week in Europe and North America, on April 27th. The game will cost 4.99€/$/4.49£, will require 112Mo of free space on the console or the microSD Card, and will be playable in Japanese, Chinese, and English.

For those who have already played the game, and really liked the music, here’s some good news: the soundtrack album will be released next week in Japan (on April 27th), and can be pre-ordered from the 2083 Online Shop right now. The album costs 2 160 Yen, and includes all 12 tracks from the game (composed by Misoka (from PANSOUND)).

Here’s the cover of the soundtrack album, featuring illustrations of Yamato (one of the playable characters) by Y. Kimura (from Skipmore):

Kamiko (Switch – eShop) comes out on April 27th in Europe and North America. The Upcoming Releases page has been updated!