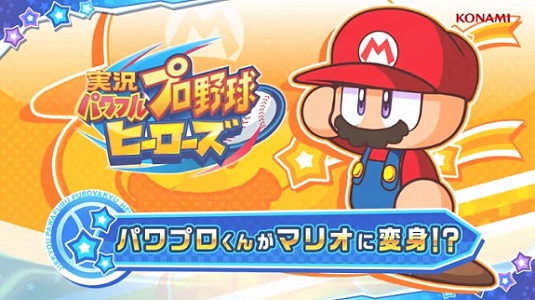 Update: added some screenshots for the Mario collaboration for Jikkyou Powerful Pro Yakyuu. Check them out below!

Last week, it was announced that Jikkyou Powerful Pro Yakyuu Heroes would get a demo on November 30th. We speculated that we would get more details about the game at that time, but it looks like we didn’t even have to wait that long. Today, Konami revealed a brand new trailer for the game, actually detailing it this time.

As mentioned before, you play as a character participating in a legendary baseball tournament. You can chose the name of the player, but also their position, and more. After that, you go and play against various baseball teams who gathered on the island, which allows you to get stronger but also earn some money (this also applies to other teammates, not just you). If you win, you can also befriend some of the players from the defeated team.

In-between matches, you can explore the island, where there’s quite a lot of things to do. You can go do some shopping, talk with the various characters, check out some special events (including some combo events), train for your next match, and more.

Konami also shared a second video, which reveals a special collaboration with… Mario! It looks like you will be able to get a special costume based on the famous plumber, but that costume isn’t all for show. It not only adds some special sound effects and music, but it also allows you to use special techniques. For example, when pitching, you can throw fireballs, and when batting, you can use a powerful Fire Shot.

Here’s some screenshots for that collaboration, courtesy of 4Gamer.net: