During the usual meeting with investors, which always follows the presentation of the latest financial results, Tatsumi Kimishima talked at great lengths about Nintendo 3DS sales (both Hardware and Software) during the past Fiscal Year.

In the past couple of years, Nintendo made efforts in order to reach a wider audience, and more specifically children and women. Tatsumi Kimishima believes their efforts in this area paid off during the past Fiscal Year, which led to an increase in sales (both Hardware and Software). What’s more, the popularity of Pokémon GO, but also Pokémon Sun and Moon, brought renewed momentum to the platform. 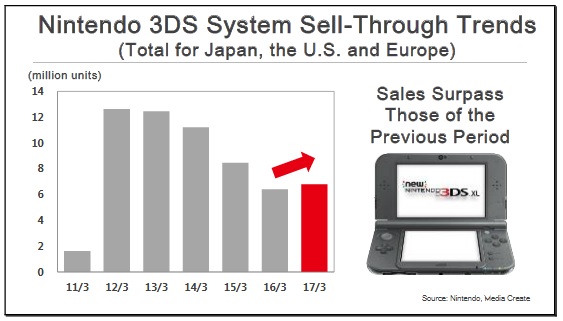 The next graph shows the share of the Nintendo 2DS within the total Nintendo 3DS sales for Fiscal Year 2016-17, in the three main regions: 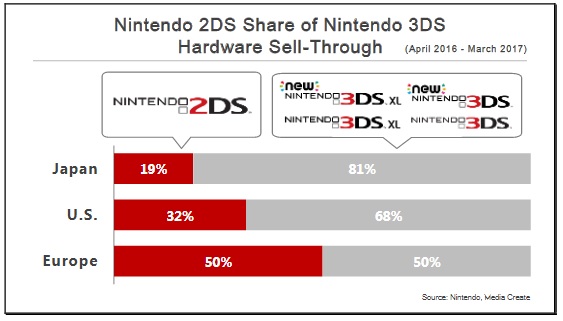 In Japan, the Nintendo 2DS was officially launched in September 2016. In the United States, Nintendo lowered the price in May, which led to an increase in sales that exceeded their expectations. For Tatsumi Kimishima, Nintendo was able to properly “leverage the product variation in the Nintendo 3DS family of systems”.

The next graph shows Software sales for first-party titles (including those in bundles): 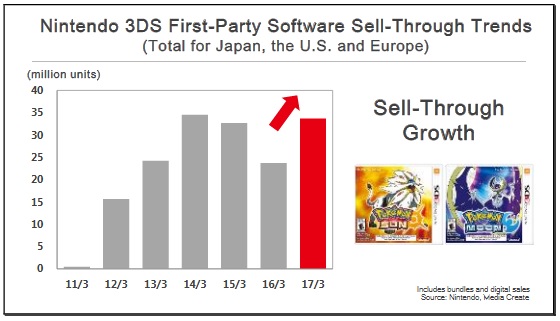 We can see a major increase in sales, due to key titles such as Pokémon Sun and Moon. Tatsumi Kimishima notes that major titles allows them to leverage the installed base of the hardware to do business on a large-scale, and Fiscal Year 2016-17 is proof of that.

During that Fiscal Year, the Nintendo 3DS found renewed momentum, and Nintendo actually see strong potential for the continuation of this
business. In other words: expect the company to keep supporting its handheld for a while longer, even with the Nintendo Switch on the market.

The next graph shows worldwide sales for Pokémon Sun and Moon: 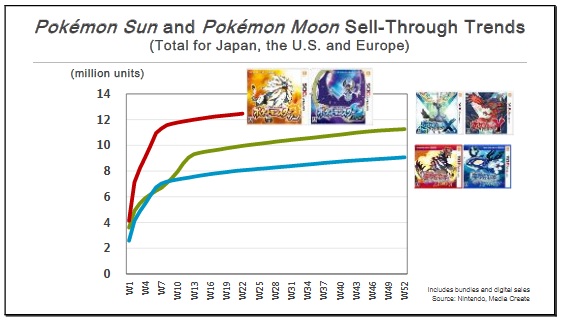 Not only did the game saw strong sales in November and December, but it kept selling at a steady pace in 2017. It’s also consistently outselling Pokémon X and Y and Pokémon Omega Ruby / Alpha Sapphire.

As for Super Mario Maker for Nintendo 3DS, it’s sold over 2 million units worldwide, and has been selling pretty steadily.

Finally, the last graph shows sales for various evergreen titles on Nintendo 3DS, that kept selling even though they were released several years ago for some of them: 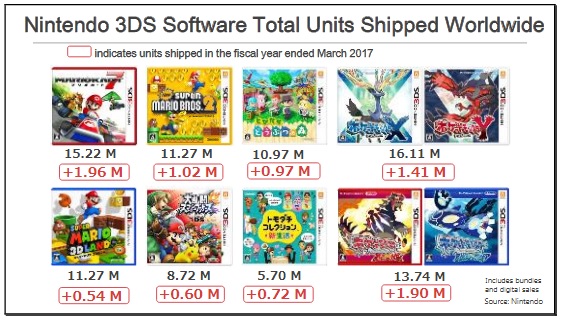