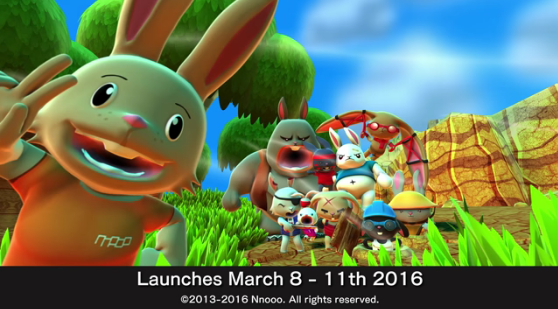 Blast ’em Bunnies is the latest game from Nnooo, and it lets you play as a cartoon bunny called Bang Bang. Your mission? Defend your rabbit burrow from the onslaught of evil rabbits.

To do so, you will be able to use various weapons: carrot rifle, watermelon machine gun, turnip mortar or runner bean laser. You can also use your hard-earned coins in order to purchase new weapons, upgrades or ammo, such as sticky raspberries, heat seeking chilli seeds, shredding leek lasers or bouncing, splitting, exploding pumpkin bombs. There’s 4 different weapons, and 16 different types of bullet types.

Blast ’em Bunnies is a first-person shooter, which can be played using the gyroscope of the Nintendo 3DS (that control scheme is not mandatory). Gameplay-wise, battles take place in arenas: bunnies spawn, and you have to defeat them all before they defeat you.

Besides the main campaign, the game also features missions (which refresh either on completion or daily), and 50 medals to unlock. There’s also:

Blast ’em Bunnies will be released on March 10th in Europe and North America, on the Nintendo eShop of the Nintendo 3DS. The game will cost $4.99 / 4.99€, and will have some DLC available at launch:

Here’s the launch trailer for the game (Xbox and PlayStation 4 versions):

Yesterday, Hullbreach Studios announced that a Software update for Defense Dome would be available tomorrow (February 10th) in North America. It will fix various bugs impacting: