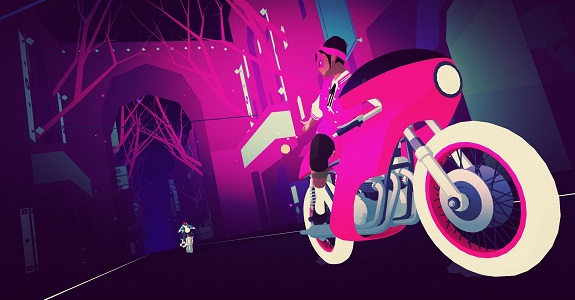 During the Game Awards 2018, several games were announced for the Nintendo Switch: Sayonara Wild Hearts, Dauntless, and
Stranger Things 3: The Game!

Sayonara Wild Hears is the latest game from Simogo, the developers of Year Walk.  It will be released in 2019 on the Nintendo eShop!

Sayonara Wild Hearts, developed by Simogo and published by Annapurna Interactive, is a euphoric music video dream about being awesome, riding motorcycles, skateboarding, dance battling, shooting lasers, wielding swords and breaking hearts at 200 mph. Every stage in the game is set to a song on a custom-written pop album. Sayonara Wild Hearts launches for Nintendo Switch in 2019.

Also, Simogo have confirmed that the game runs at a silky smooth 60fps in both TV (1080p) and Handheld/Tablemode (720p), with barely any loading times. Now that’s optimisation and polishing for you!

Sayonara Wild Hearts (Switch – eShop) comes out in 2019 in Europe and North America. The Upcoming Games page has been updated!

During the Game Awards, Phoenix Labs announced that they are bringing Dauntless (a Free 2 Play online action RPG) to more platforms, including the Nintendo Switch. It will offer full cross-platform support, allowing players to play with their friends and retain all of their progression, customization and purchased items across all supported platforms.

Dauntless (Switch – eShop) comes out in 2019 in Europe and North America. The Upcoming Games page has been updated!

Are you a fan of Stranger Things, the hit series from Netflix? If yes, you’re in lucky: a game based on that very series is headed to the Nintendo Switch, called Stranger Things 3: The Game, and developed by BonusXP.

Stranger Things 3: The Game (Switch – eShop) does not have a release date yet. The Upcoming Games page has been updated!