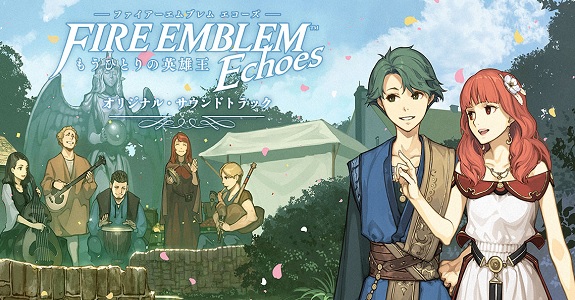 Fire Emblem Echoes: Shadows of Valentia was released earlier this year (on April 20th in Japan, and May 19th in Europe and North America), but the soundtrack album is still not available. But it’s only a matter of weeks until it is: Symphony 5 announced today that it would be released on October 25th in Japan.

The Fire Emblem Echoes: Shadows of Valentia – Original Soundtrack Album will cost 5 300 Yen, and comes with 5 discs (including 1 data disc, for a total of over 5 hours of music. The packaging features an illustration by Hidari (the chara-designer).

The album also includes the insert song “Arcadia no Tsugibito” (including the English and short instrumental versions, with lyrics provided in the booklet), the various tracks from the DLC and amiibo features, the complete soundtrack of the Famicom version, the main theme of the Fire Emblem 0 TCG, a HD version of the Title Loop movie, a full-colour booklet (24 pages), comments by the composers, and some bonuses.

Here’s a video with a preview of some of the tracks from the Fire Emblem Echoes: Shadows of Valentia – Original Soundtrack album:

And here’s everything included in this soundtrack album:

The full tracklist (in Japanese) can be found on the official website (see source link below). We’ll have pre-order links ready as soon as possible when pre-orders go live, so stay tuned!