Here’s the previews for this week’s issue of Famitsu magazine, which comes out on Thursday, May 21st!

This week, Splatoon is one of the highlights of Famitsu magazine: it’s getting a 15-page article! This article will consist of a recap of previously revealed information about the game (like the Hero Mode -Single Player- and Turf Wars), but also some brand new and up-to-date details.

But that’s not all: there will also be a special collaboration with Nintendo, called the “Squid Fashion Contest”. Readers of Famitsu magazine will be able to submit costume designs, and the best ones (selected by Nintendo) will be added to Splatoon via Software updates for the game!

Obviously, this contest is only for people residing in Japan. Unfortunately, we do not know if the winning costumes will also be distributed in Europe and North America. More details will be available later this week, as Famitsu will have an announcement on its website.

Just one week before the game’s release, Famitsu magazine will have some new information about Hatsune Miku: Project Mirai DX on Thursday. The new info will focus on the extra content from this Deluxe version of Hatsune Miku: Project Mirai. As for the article itself, it wil include an interview with Pinokio-P (who composed the new Main Theme for this version of the game). 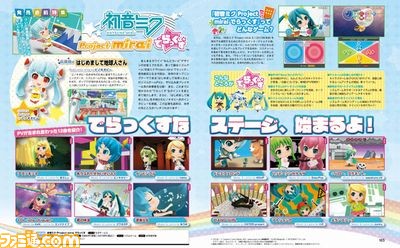 Hatsune Miku: Project Mirai DX (3DS) comes out on May 26th in North America, May 28th in Japan and May 29th in Europe (NB: the western release of the game may have been delayed, but SEGA hasn’t made any announcement yet).

This week, Famitsu magazine will have the 27th issue of Yo-kai Watch Time, a special feature which is all about Level-5’s successful franchise (games, goodies, etc.).

This time around, there will be some new details about Yo-kai Watch Busters, including the Yo-kai and Boss characters exclusive to each version. The article will also have some info about features unlocked when linking the two versions (via co-op play), but also the three game modes and the Home Base of the Busters Team.

There will also be a couple of new details about Yo-kai Watch 3, but nothing major from the looks of it.