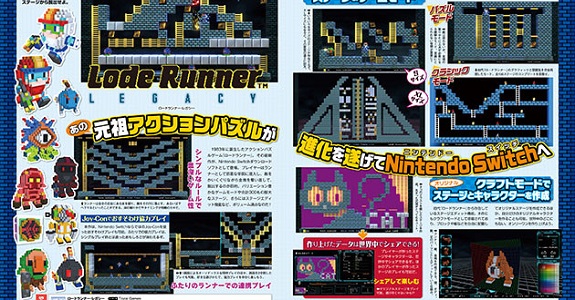 Earlier today, early leaks from Famitsu magazine allowed us to find out that Ys VIII: Lacrimosa of Dana was releasing on June 28th in Japan. But this isn’t the only bit of Nintendo Switch-related news in this week’s issue, as Daitoshokan no Hitsujikai -Library Party- and Lode Runner: Legacy are also featured!

Daitoshokan no Hitsujikai (known as A Good Librarian Like a Good Shepherd in English) is an adult visual novel, originally released on PC back in 2013.

This Nintendo Switch version is called Daitoshokan no Hitsujikai -Library Party-, and is seemingly based on the PlayStation Vita version of the game (released back in 2015). It includes the fan discs, as well as a brand new heroine. The game will be released on July 26th in Japan, and will cost 6 800 Yen (+ taxes?).

Daitoshokan no Hitsujikai -Library Party- (Switch) comes out on July 26th in Japan. The Upcoming Games page has been updated!

Lode Runner: Legacy is the latest game in the Lode Runner series. It was first released on Steam last year, but it’s now headed to the Nintendo Switch, this Spring. This version costs 1 112 Yen, and features a character and level editors, allowing you to share your creations with other players.

Here’s the list of features (from the Steam version of the game):

Lode Runner: Legacy (Swith – eShop) will be released this Spring in Japan.