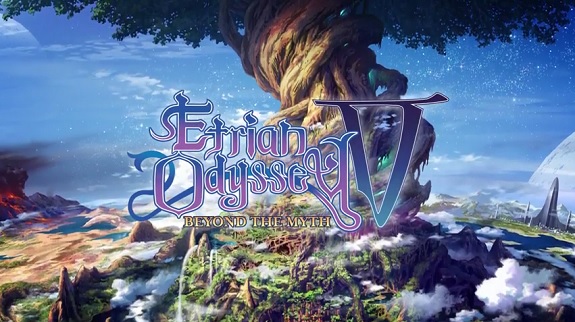 Etrian Odyssey V: Beyond the Myth came out last year in Japan, but it’s still nowhere to be seen in Europe and North America. But the good news, we finally have a release… for North America, only. Earlier this week, Atlus sent a press release to announce that the game would be released on October 17th in North America.

The release date for Europe will be announced at a later date, but it’s likely it will be on the same day as North America… hopefully. And as announced previously, the game will get a Launch Edition with an artwork and a soundtrack CD: click here for more details about it!

Also, Atlus has shared not one, but two new videos for Etrian Odyssey V: Beyond the Myth. The first one is about the Earthlain Fencer, a class of warriors who certainly know how to use a blade. They can use both rapier and shield in battle, and they’re pretty quick on their feet.

The Fencer class excels at evasion, stabbing, initiating defensive buffs, chaining together attacks with other party members, and more. If you want to further specialise them, you can get rid of unnecessary equipment to give them even more speed, or instead have them focus on swordsmanship to make sure monsters can feel true pain.

Here’s the trailer for the Fencer class in Etrian Odyssey V: Beyond the Myth:

The second trailer is for the Celestian Warlock class. When you want to deal with monsters in the labyrinth, you can use cold hard steel or explosive gunpowder, but sometimes, you need more than that. That’s when the Warlock class kicks in: using their magic, they can summon raging fireballs, monstrous hailstorms, amplify the magical abilities of the other party members, and more.

You can choose to have them specialise in the base elemental skills (fire, ice, and lightning), but you can also have them learn new spells instead (earth and wind).

Here’s the trailer for the Warlock class in Etrian Odyssey V: Beyond the Myth:

Etrian Odyssey V: Beyond the Myth (3DS) comes out on October 17th in North America, and this Fall in Europe.