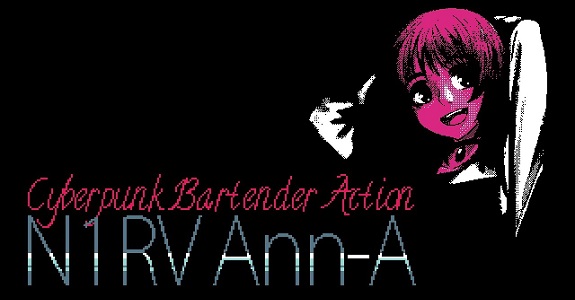 Today, Sukeban revealed their next game: N1RV Ann-A, a follow up to VA-11 Hall-A (haven’t played it yet? Well, it’s available on the Nintendo eShop of the Nintendo Switch right now! But don’t worry, this new game is stand-alone!).

Here’s the debut trailer, as well as some details straight from the developers:

The story this time around is about Sam, a bartender living in Saint Alicia; an artificial island that, just like Glitch City, was developed as a playground for corporations that have been forming city states of their own around the globe in order to circumvent regulations. Sam is at odds with her romantic partner, Leon, who is the head of a small Yakuza family that operates at the redlight district. Their relationship is in the rocks, as they deal with the conflicts arising from their very different lives while taking care of their 8 year-old boy, Tony, who’s growing up in a increasingly harsher society.

And here’s some more details about the story:

Escape from VA11 HALL-A’s Glitch City to Saint Alicia, an idyllic tourist paradise with an upscale bar called N1RV Ann-A. But opulence and extravagance are merely smokescreens: the artificial island hides a seedy underbelly. Its dystopian economy touches all aspects of life as bar patrons contend with mafia extortion, human trafficking and other sordid crimes.

For bartender Sam, trouble hits close to home. Her relationship with her partner Leon, who moonlights as a Yakuza, is on the rocks as she works hard to care for their 8-year-old son, Tony.

Is their relationship dead in the waters of the caribbean sea? Or will love prevail in the unnatural city?

You can find more details about the game on the official blog!

N1RV Ann-A (Switch – eShop) does not have a release date yet. The Upcoming Games page has been updated!

Today, Elden Pixels confirmed that Alwa’s Awakening is releasing on Nintendo Switch; in fact, it’s already available for pre-purchase on the Nintendo eShop in North America!

Alwa’s Awakening (Switch – eShop) comes out on September 27th in Europe and North America. The Upcoming Games page has been updated!

#SpeedBrawl is coming in HOT today!!! But first… Johnson lands in the last of our micro-trailers. See you all *damn*… really soon!

Speed Brawl (Switch – eShop) does not have a release date yet in Europe.

Here’s the latest character profile for WILL: A Wonderful World:

He leaves Mexico at just 18 years old to try and find his sister in Hong Kong. His life takes dramatic and unexpected turns as he seeks answers…

WILL: A Wonderful World (Switch – eShop) comes out in October worldwide.

In #RICO, traits are like levelling up, but instead of EXP, you gain awesome skills that can be equipped, like the “Slip ‘n’ Slide” for those Insta-worthy kills, and “Long and slow” to extend those Matrix feels!

Rico (Switch) does not have a release date yet.