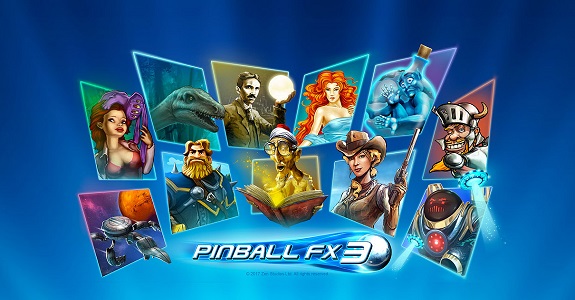 Yesterday, PlayWay announced Bad Dream: Fever for the Nintendo Switch. It’s a point and click adventure game develpoepd by Desert Fox, featuring “unique design, unpredictability and puzzles demanding creativity”. It will be released in Q1 2019 in Europe and North America, and will be playable in English, French, Italian, German, Spanish, Polish, and Russian.

In Bad Dream: Fever the player must face a mysterious ink plague and a feverish reality full of anxiety. As the creators indicate, Bad Dream: Fever takes on average about 4 hours to complete. The game offers one storyline, where the remarkable story is intertwined with unconventional puzzles.

Bad Dream: Fever (Switch – eShop) comes out in Q1 2019 in Europe and North America. The Upcoming Games page has been updated!

Yesterday, Zen Studios announced that Williams Pinball Volume 2 for Pinball FX3 will be released on December 4th. It will cost $9.99, and will include the following tables (available in classic and remastered versions): The Party Zone, Black Rose, and Attack from Mars.

Here’s a trailer, some more details, and some screenshots:

Just as Williams Pinball Volume 1 featured a dragon bursting to life and a fisherman reeling ‘em in, the remastered 1990s classics in Williams Pinball Volume 2 are enhanced in similar ways. In The Party Zone, host Captain B. Zarr comes to life as a 3D interactive character parading around on a giant rocket, while Attack from Mars fires missiles upon a flying saucer circling the playfield, thanks to the orders barked by a 3D-animated general. At the same time, Black Rose, Queen of the High Seas, captains her fully 3D-animated ship across a spinning globe as you loot a treasure chest and fire an interactive cannon. Of course, classic simulations are still available for anyone craving the most authentic arcade experience.

Williams Pinball Volume 2 for Pinball FX3 (Switch – eShop) comes out on December 4th in Europe and North America. The Upcoming Games page has been updated!

I am the Hero

Yesterday, Rainy Frog announced that I am the Hero will be released on November 15th in Japan. It’s already available for pre-purchase for 1 000 Yen (pre-purchase offer, regular price: 1 200 Yen). It requires 342MB of free space, and offers several languages options (including English).

I am the Hero (Switch – eShop) comes out on November 22nd in Japan, and later this year in Europe and North America. The Upcoming Games page has been updated!

Here’s the latest video for The Demon Crystal on Nintendo Switch:

The Demon Crystal (Switch – eShop) comes out this Winter in Japan.