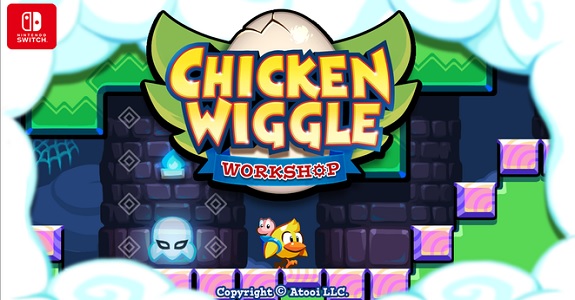 With a little over a week left until the end of the Kickstarter campaign, the Nintendo Switch version of Chicken Wiggle has hit the 80% funded milestone. As of writing, 20 391€ of the 24 092€ / $25 390 of the $30 000 required for the campaign to succeed have already been pledged.

In order to encourage more people to make a pledge, and those who have already made one to increase it, two stretchgoals have been revealed:

Speaking of Chicken Wiggle, here’s a video of outtakes from the Kickstarter video:

Click here to check out more details about the Kickstarter campaign!

Cube Life: Island Survival 2018 (Switch – eShop) does not have a release date yet.

Planet Alpha (Switch – eShop) comes out this year in Europe and North America.

Here’s a couple of screenshots for Trailblazers:

Trailblazers (Switch – eShop) comes out this Spring in Europe and North America.

Here’s a trailer and some screenshots for Layers of Fear: Legacy, releasing on March 29th in Japan (price: 2 000 Yen):

Layers of Fear: Legacy (Switch – eShop) comes out on March 29th in Japan. The Upcoming Games page has been updated!

Here’s some concept art for Achtung! Cthulhu Tactics, showing the Forest of Fear: